Demonstrators stand near railway tracks during a protest near Belleville, Ontario, on Thursday. 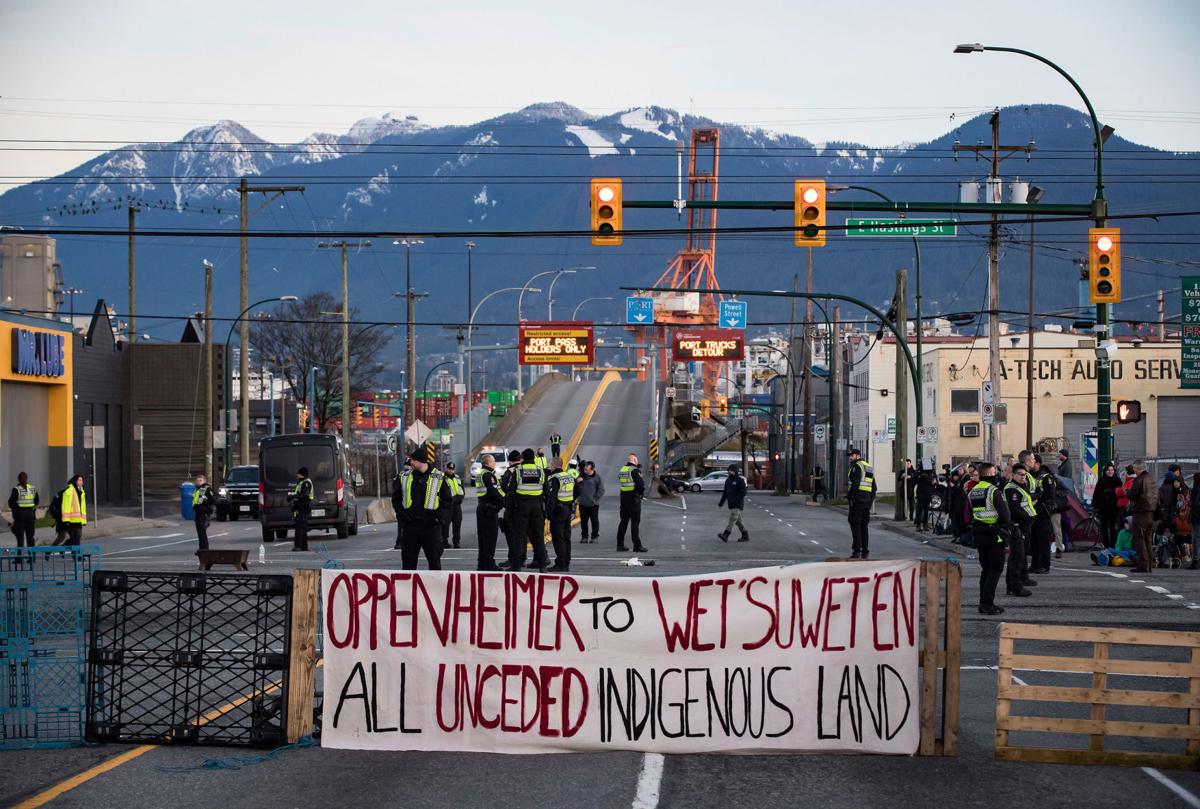 Police officers stand on a road after clearing the intersection of protesters that were blocking an entrance to a port Wednesday in Vancouver, British Columia. The demonstration expressed solidarity with Wet'suwet'en protesters who were arrested last week.

Demonstrators stand near railway tracks during a protest near Belleville, Ontario, on Thursday. 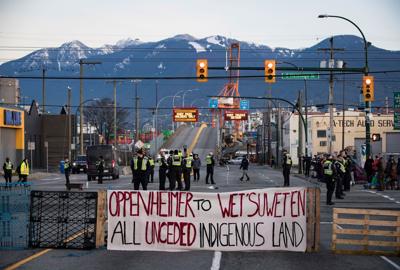 Police officers stand on a road after clearing the intersection of protesters that were blocking an entrance to a port Wednesday in Vancouver, British Columia. The demonstration expressed solidarity with Wet'suwet'en protesters who were arrested last week.

Protesters blocking Canadian railways have shut down large portions of the nation's passenger and freight train service this week, knocking out a travel option for thousands and spurring a business group to warn the cross-country flow of food and other goods will slow.

The protests started last week when police started arresting members of an indigenous group that was blocking a road to a construction site for the Coastal GasLink natural gas pipeline in British Columbia, CNN network partner CTV reported.

Indigenous groups and allies blocked railways and government buildings around the country in solidarity with the British Columbia group. Some rail blockades have ended, but others remain, including near Belleville, Ontario.

Because of the remaining blockades:

• Passenger service VIA Rail, which largely uses CN railways, said Thursday its suspended most of its runs across the country until further notice, after small-scale cancellations earlier in the week.

That will have thousands of people looking for alternative transportation daily, as VIA Rail said it served 5 million passengers last year.

"I got stuck here, basically," Amanda Viney, who was in Montreal on Thursday for a business trip, told CNN network partner CBC. "Now I'm going to attempt to catch a Greyhound back to Ottawa like everyone else."

Near Belleville, a two-and-a-half-hour drive northeast of Toronto, activists with the Tyendinaga Mohawk group have placed vehicles near the tracks -- not across them, but too close for trains to safely pass, CBC reported.

"This particular movement going across the nation around is so very important for the next generation," Pauline Maracle, who has been cooking for the camped-out protesters for a week, told CBC. "At the end of the day, it's the people for the people."

Freight shutdown will restrict supplies of food and other materials, business group warns

CN and the Canadian Chamber of Commerce have called on the government to remove the rail blockades.

The rail company obtained a court injunction last week to end the Mohawk demonstration near Belleville, CBC reported, but police so far have not dispersed them.

CN has said the shutdown of its eastern network will halt all transcontinental freight trains across its network and may lead to temporary layoffs of operational staff.

Stopping those trains will "severely limit the movement of perishable foods and other consumer items, grain, construction materials and propane for Quebec and Atlantic Canada," the Canadian Chamber of Commerce wrote to two federal government ministers this week.

"Until we have rail service resumed, I would say no level of government is fulfilling its duties to help uphold the rule of law and ensure that commerce can flow freely throughout our country," Greer said.

Transport Minister Marc Garneau said he would meet Friday with representatives of indigenous organizations to discuss "a way forward."

"We are actively working for a ... resolution on all remaining blockades," he said.

They "discussed how freedom of expression is an important democratic right, but activity must respect the courts and act within the law," according to Trudeau's office.

This Corgi Puppy Loves To Howl While She Eats | The Dodo

A FedEx driver jumped off a bridge to avoid an oncoming truck and fell 75 feet. He survived with a few broken ribs