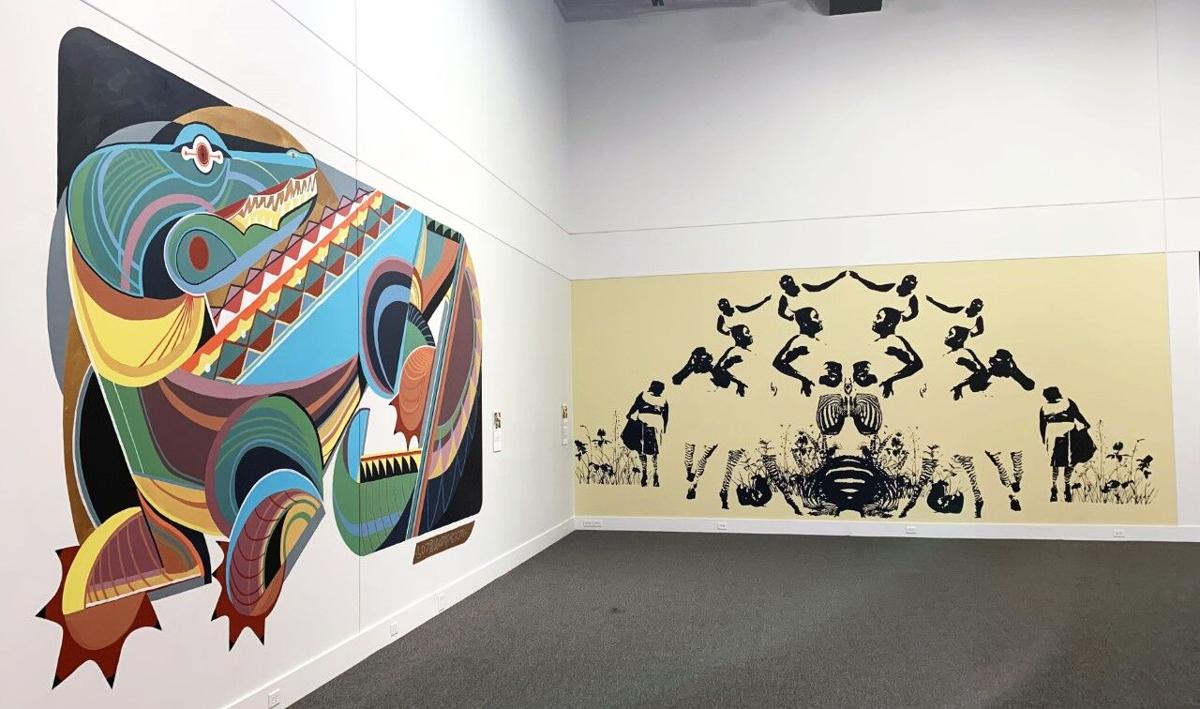 Artists David Hale of Athens and Shanequa Gay of Atlanta created these murals for “On the Wall,” which is on exhibition through Feb. 20 in the Haley Gallery of the Albany Museum of Art.

Artist Amanda Jane Burk of Athens and Andrew College Art Professor Chris Johnson of Columbus created these two murals for “On the Wall.”

Paintings by Atlanta artist Sarah Emerson’s “O, Smithereens” series are in the “On the Wall” exhibition that continues through Feb. 20 in the Haley Gallery of the Albany Museum of Art. 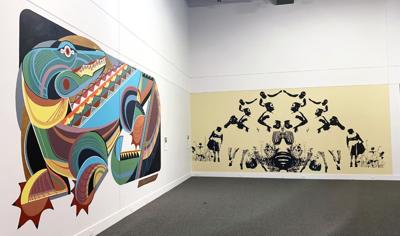 Artists David Hale of Athens and Shanequa Gay of Atlanta created these murals for “On the Wall,” which is on exhibition through Feb. 20 in the Haley Gallery of the Albany Museum of Art.

Artist Amanda Jane Burk of Athens and Andrew College Art Professor Chris Johnson of Columbus created these two murals for “On the Wall.”

Paintings by Atlanta artist Sarah Emerson’s “O, Smithereens” series are in the “On the Wall” exhibition that continues through Feb. 20 in the Haley Gallery of the Albany Museum of Art.

ALBANY — The very walls of the Albany Museum of Art’s Haley Gallery have become unique works of art in the exhibition “On the Wall,” which continues through Feb. 20.

Over the span of a week in late October and early November, a quartet of artists — Amanda Jane Burk, Shanequa Gay, David Hale and Chris Johnson — worked several long days each to transform the walls of the Haley Gallery into giant canvases, each about 25 feet wide and 12 feet high. Complementing the four murals are paintings by Sarah Emerson from her “O, Smithereens” series.

“This fall, the AMA has morphed into a studio for working artists, in which the studio ultimately becomes the artwork and the exhibition itself,” Museum Director Andrew J. Wulf said. “As museums become more laboratories of artistic creativity than ivory tower monuments to a traditional art history canon, these four artists-in-residence have taken a leap of faith with us, knowing these ephemeral works will one day disappear and be painted over to make way for new works and new exhibitions. There is something insatiably precious about the shelf-life of any artwork.”

From Wuhan to the White House: A timeline of COVID-19’s spread

Stacker constructed a timeline of the COVID-19 pandemic from its first mention by Dr. Li Wenliang in Wuhan, China, to crossing 400,000 U.S. deaths a year later. Click for more.

“On the Wall” is one of four exhibitions currently on view at the AMA. Guests also can see “Escape Plan,” an installation by Elinor Saragoussi, in the West Gallery; “Midlands,” video art and photography by Courtney McClellan, in the East Gallery; and the Georgia Artists Guild of Albany 27th Annual Juried Exhibition in the recently re-opened upstairs McCormack Gallery. The AMA is open to the public 10 a.m.-5 p.m. on Tuesdays, Wednesday and Fridays, and 10 a.m.-7 p.m. on Thursdays. AMA members can schedule private museum visits 10 a.m.-4:30 p.m. on Mondays. Admission is free to everyone.

“Wall painting has been central to culture and environment from the beginnings of human civilization,” AMA Guest Curator Didi Dunphy said, adding she wanted to acknowledge and show respect for the Muscogee Creek people who are native to southwest Georgia.

“Murals reflect the place and people, a piece of their story, images of the now and here,” Dunphy said. “Not lasting, still and unmovable monuments, murals express this moment and how we got to this place in this time through dynamic artist interpretation. These works in the galleries are grand endeavors and temporal. How wondrous it is that we can contemplate this scale, color, image and subject.”

Each artist’s individual style and thoughts emerge in the works.

Hale’s mural — a massive and colorful stylized alligator — brings to mind Native American art with its vibrant colors and patterns, while also showcasing a creature that is native to the Flint River ecosystem that runs through the heart of Albany.

Gay’s mural, titled “Uninterrupted, I Can Give Birth Over and Over and Over Again,” is a giant Rorschach Test with repeated images of a woman that evoke thoughts of reproduction and repetition.

“The piece is basically about creation and time, and the ability to give birth,” Gay, a multimedia artist from Atlanta, said. “I’m interested in old-world, antiquated thought processes.

“I borrowed from the indigenous mindset of ‘all are thou,’ meaning animals and women are just as holy as men, and the thought process that creation can repeat itself over and over again, that we’re constantly in a process of giving birth and time is continuing and circular.”

Gay said she relates those ideas “through the Rorschach Test in which you may see things that someone else may not see. The way black women have been perceived through mainstream media, I’m looking for ways to create counter narratives to that.”

Johnson, a mural painter from Columbus, is an associate professor of art at Andrew College in Cuthbert. He has created more than two dozen murals, including the ones at Lincoln Elementary Magnet School in Albany that was made possible through a Vibrant Communities Grant the AMA received from the Georgia Council for the Arts.

For “On the Wall,” Johnson created a giant Albany “postcard” that highlights the community’s roots in the river system, as well as Albany’s history. Images of Albany native Ray Charles, the Flint River railroad trestle, the MillerCoors plant, the fountain at the Charles M. Sherrod Civil Rights Park, Radium Springs, and the Oglethorpe Bridge fill the letters ALBANY, with ghosted oak and palm trees serving as a backdrop for native reptile, birds and fish.

“I reflected on my time in Albany when I was young and growing up,” Johnson said. “I lived on the Marine Corps base, and they have this great wildlife refuge. I spent hours and hours each day out there.

“This is based on the river, which is a huge part of the identity of Albany. I picked animals and things that are around the river and the wildlife refuge on the Marine Corps base, and the postcard is filled with historical figures, places of importance and cultural icons from Albany.”

Burk, a printmaker who lives and works in Athens, focused on idioms and colloquialisms in her mural, which includes painted marks that are reminiscent of the ones she makes when creating a woodcut print.

“I liked the idea of making a mural that had the mark-making of my printmaking,” she said. “A lot of my printmaking is very graphic in nature, almost posterized, because I do a lot of screenprinting, but also a lot of relief printing and woodcut printing.

“I became kind of obsessed with the idea that they (the idioms) are so commonplace that people don’t finish the whole phrase anymore. I decided to illustrate the idioms. I had a list and narrowed it down to the few I put in this mural. What I find interesting about idioms is they are very visual. If you had to learn the English language and you came across an idiom, I would think it would be difficult to understand the meaning behind it. The meaning is not the same as what’s implied.”

The exhibition also includes seven paintings by Sarah Emerson, an Atlanta artist who teaches at Agnes Scott College in Decatur.

“Emerson’s works dive into contemporary landscape and how it is transformed by human intervention and natural phenomenon,” Dunphy noted. “Each painting abandons the peaceful landscape horizon in order to reassemble eco debris detached from any stable ground. These highly stylized paintings contain images of mud and pollutant spills, flowers, smoke, disembodied eyes, and limbs that jut out from the clouds of dust and destruction.

“Emerson’s camouflage of beautiful colors explores themes that reflect on the fragility of life, the futility of earthly pleasures, and the disintegration of our natural landscape.”

The AMA is able to offer free admission in large part because of the support of its members. The museum is in the final weeks of its #FallinLoveWithArt membership drive. Get information on how to become a member and help create a stronger community through art at www.albanymuseum.com/join.

Dustin Diamond completes first round of chemotherapy for cancer treatment

Randy Parton, the country singer and Dolly Parton's younger brother, has died after a battle with cancer

'Bridgerton' is returning for a second season