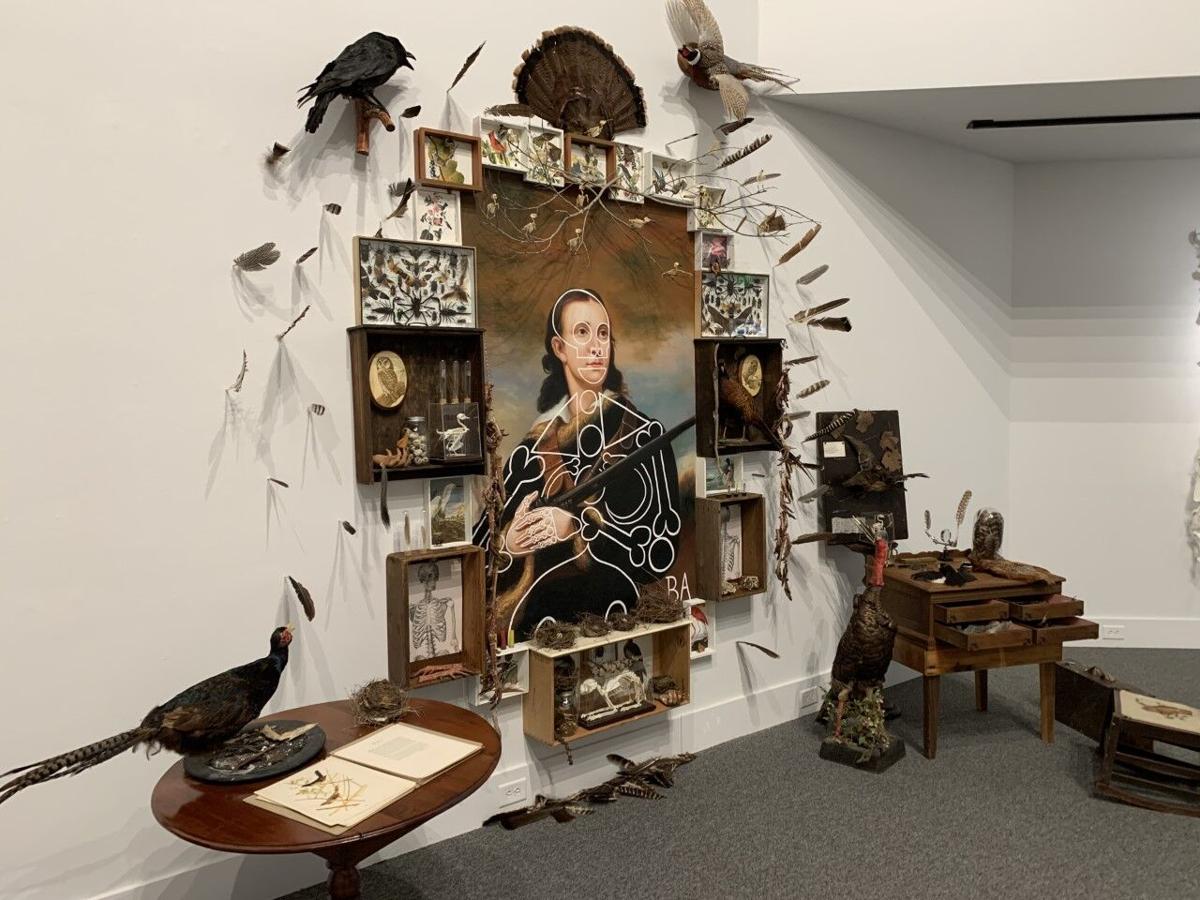 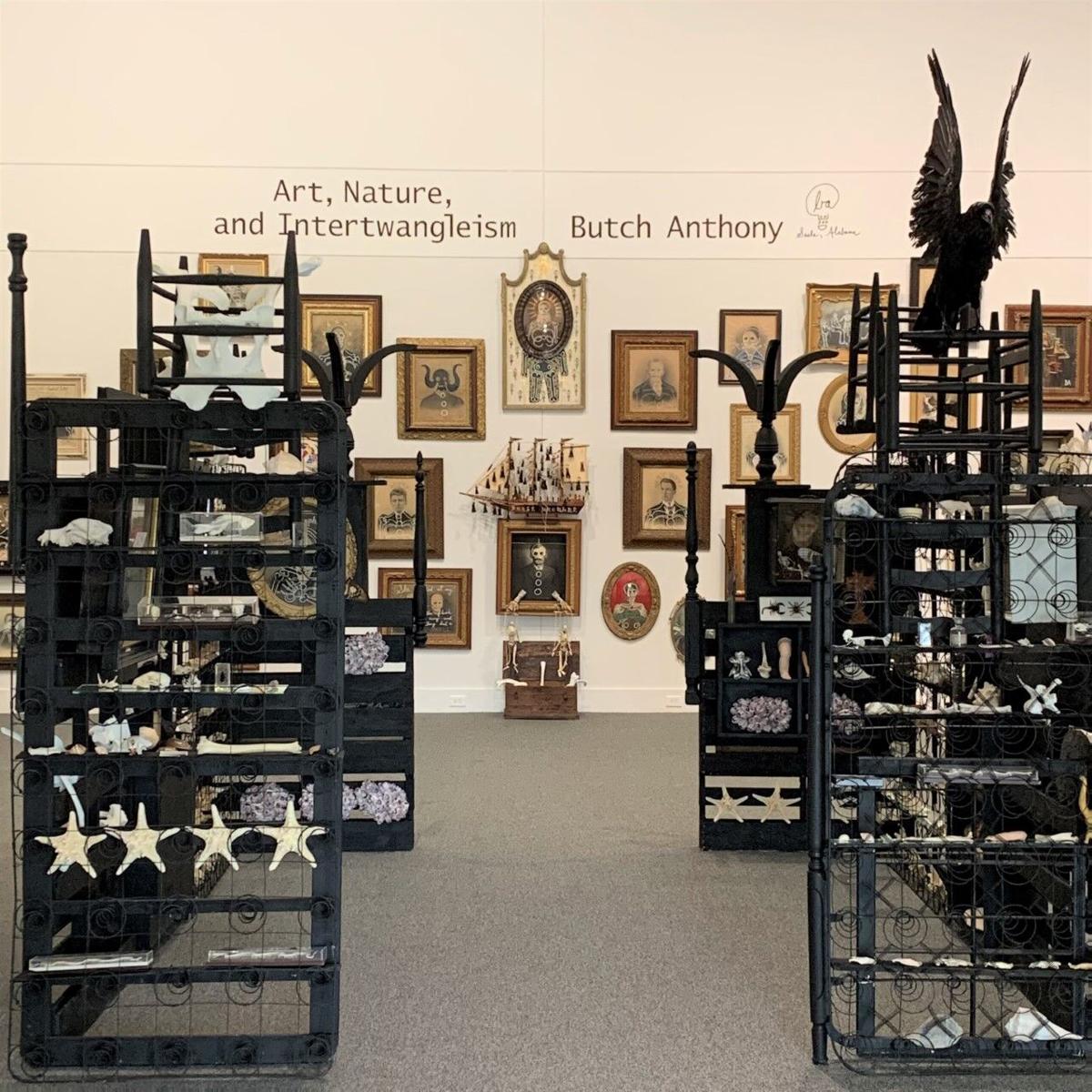 An exhibition of Butch Anthony’s work, “Art, Nature, and Intertwangleism,” continues through July 31 in the Haley Gallery. 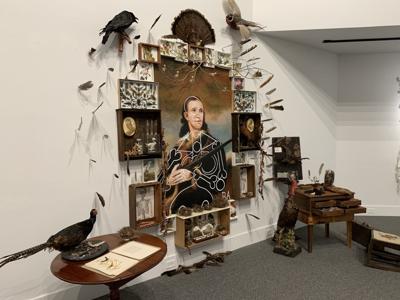 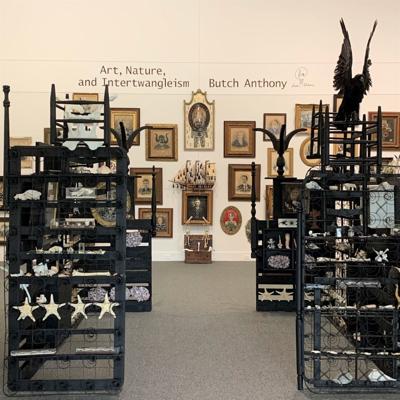 An exhibition of Butch Anthony’s work, “Art, Nature, and Intertwangleism,” continues through July 31 in the Haley Gallery.

ALBANY — For Butch Anthony, art is always right there is front of him, just waiting to be discovered and put together.

“Anybody can make art,” Anthony said. “You just got to get out there. You don’t need a lot of art materials. You just get out and find them in the woods or on the road, and start putting them together. Make your own stuff.”

That is what Anthony does. He uses animal bones, old portraits, and other seemingly commonplace objects to create works of art that have garnered him national recognition. Thousands of people visit his Museum of Wonder each year in his hometown of Seale, Ala., about 90 miles west of Albany.

An exhibition of Anthony’s work, “Art, Nature, and Intertwangleism,” continues through July 31 in the Haley Gallery of the Albany Museum of Art at 311 Meadowlark Drive. The museum is open 10 a.m.-5 p.m. Tuesdays, Wednesdays and Fridays, and 10 a.m.-7 p.m. Thursdays. Admission is free.

“We are thrilled by all those who have come to see Butch’s show at the AMA, and we are offering a couple of special treats that will allow an up-close-and-personal encounter with the artist himself,” AMA Executive Director Andrew J. Wulf said.

In the first of those events, Anthony will lead a “Cabinet of Curiosities Tour” of his exhibition at 5:30 p.m. on May 20. That tour is free for AMA members and $5 for non-members. Space is limited for the event and may be reserved by contacting AMA Director of Education and Public Programming Annie Vanoteghem at annie.vanoteghem@albanymuseum.com or at (229) 439-8400.

Albany Museum of Art members also will have an opportunity to meet the artist in his own environment at the Museum of Wonder on June 19. The trip, which includes lunch, is free and open to AMA members. The excursion is limited to 50 people, so AMA Director of Development and Membership Chloe Hinton said those interested should register as soon as possible. A registration link may be found at www.albanymuseum.com/butch-anthony.

“This is a special benefit of being an AMA member, and our way of saying thank you to our members who so generously support the museum and our work to build a stronger, more united community through art, including inspiring art exhibitions, free admission and programs for all ages,” Hinton said. “Also, it’s not too late to join the AMA and become eligible to sign up for this fantastic trip, as well as other benefits.”

Interested persons can become a member online at www.albanymuseum.com/join.

A bus will be chartered for transportation and will depart from the AMA at 9 a.m., but members who sign up can opt to drive to Seale if they prefer. The tour at the Museum of Wonder will begin at 11 a.m. Lunch will follow the 90-minute tour. The bus will return to the Albany Museum of Art by 5 p.m.

Thousands of tourists annually visit Anthony’s Museum of Wonder, which he expanded into the World’s First Drive-Thru Museum. There, they discover his unique art style, which he describes as “Intertwangleism,” a word you will not find in your dictionary.

Anthony puts together his art in unusual ways. His pieces include a large quilt made entirely from sun-bleached animal bones that have been tied together in a pattern with wire. There are installations of John James Audubon and Charles Darwin, each with a skeletal pattern painted onto his portrait and each with objects relevant to his work.

Anthony uses a number of techniques in his work, including painting, mixed media, sculpture and embroidery. He has kept journals over the decades for use as he explores themes of identity, nature and stories from those pages. His practice of painting bones on antique portraits stems from his interest in biology and zoology, two of the subjects the self-taught artist studied at Auburn University. Anthony has numerous portraits to which he has given the exoskeleton treatment, along with other seemingly disparate objects that somehow fit in.

“I go around to old thrift shops and find them,” Anthony said of the portraits that he gives his Intertwangleism treatment. “Then, other people are out all the time looking for me. I found some lately — because I wiped out Alabama — up in Ohio where the Amish live. They have tons of them. I got a guy that goes up there and finds them.”

For Anthony, in many ways it’s a continuation of the way he spent his time during his youth. A native of Pensacola, Fla., he grew up on his family’s 80-acre property in Seale, where he lives and works in a home he built by hand. Now in his late 50s, he’s still driven by curiosity he had as a youth, when he made a discovery that helped direct the course of his adult life.

“When we were little, there weren’t video games and stuff,” Anthony noted. “We’d go out in the woods and look for arrowheads and build tree forts and camp out all the time. When I was about 14, I found a dinosaur bone in a creek. Then people started bringing me stuff they found, and I built a little museum at my old barn at home. I just started from that.”

His Museum of Wonder grew into an internationally recognized attraction. Its popularity could not be contained by its log cabin walls, leading to a 2014 reinvention and expansion into The World’s First Drive Thru Museum.

“So many people started coming after I found that bone and started painting that I had to build a drive-thru so it could take all the cars,” he said. “I get about 100 cars a day coming through.”

In addition to the Museum of Wonder, Anthony has The Possum Trot, where his artwork is displayed and sold.

Anthony’s work has been featured in solo, group, and juried exhibitions across the United States and abroad in venues including the Akron Museum of Art in Akron, Ohio; the Wiregrass Museum of Art in Dothan, Ala.; Halsey Institute of Contemporary Art in Charleston, S.C., and the Black Rat Project in London, England. He has been featured on the TV series American Pickers, and his work has been included in publications including The New York Times, Garden and Gun, and Hyperallergic. He was included in “Alabama Creates: 200 Years of Art and Artists,” a book that showcases master artists from Alabama.

“Butch Anthony: Art, Nature, and Intertwangleism” is one of five exhibitions currently showing at the AMA. Also on exhibition are “Work, Worship & Community: Paul Kwilecki” in the East Gallery, “Educators as Artists: Fourth College Faculty Exhibition” in the McCormack Gallery, “Works by Tom Ferguson” in the Hodges Gallery, and “Escape Plan, an Installation by Elinor Saragoussi,” in the West Gallery.

To find out more about Butch Anthony, visit his website, www.museumofwonder.com.

Gloria Estefan, Sting and other celebs will support India with star-studded event

A brief history of television, by decade

Windows 11 is here: Everything you need to know

Amazon is likely about to face a much bigger union fight