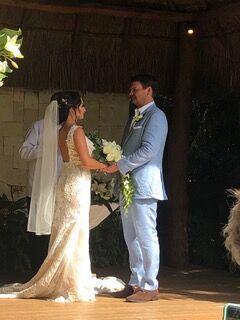 Above: The wedding of Tripp and Gabriela drew a local father and son to a once-in-a-lifetime musical trip to Mexico. Below: A view from the sky of Mexican beaches in Cancun was a welcome sight for first-time travelers to the country. 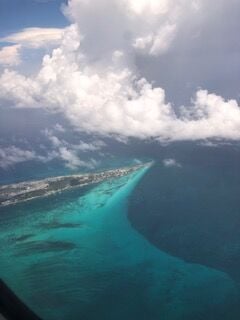 A view from the sky of Mexican beaches in Cancun was a welcome sight for first-time travelers to the country. 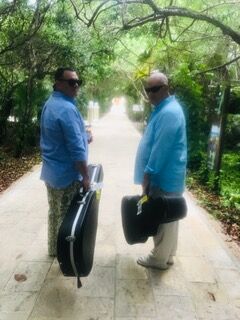 Father and son — Levi, left, and Connell — prepare to play at a Mexican wedding. 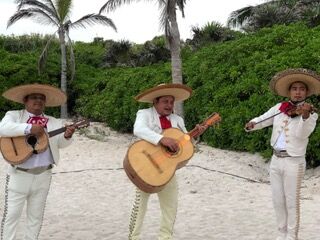 A Mariachi band helps set the scene for Tripp and Gabriela’s wedding. 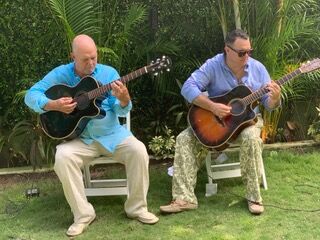 Connell, left, and Levi Anderson perform an extensive set list at a wedding in Mexico. 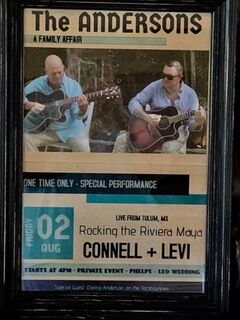 A “gig poster” was Connell and Levi Anderson’s gift of appreciation for their performance at a fantasy Mexican wedding.

Above: The wedding of Tripp and Gabriela drew a local father and son to a once-in-a-lifetime musical trip to Mexico. Below: A view from the sky of Mexican beaches in Cancun was a welcome sight for first-time travelers to the country.

A view from the sky of Mexican beaches in Cancun was a welcome sight for first-time travelers to the country.

Father and son — Levi, left, and Connell — prepare to play at a Mexican wedding.

A Mariachi band helps set the scene for Tripp and Gabriela’s wedding.

Connell, left, and Levi Anderson perform an extensive set list at a wedding in Mexico.

A “gig poster” was Connell and Levi Anderson’s gift of appreciation for their performance at a fantasy Mexican wedding.

This is the story about Tripp and Gabriela, who were married on Aug. 2, 2019, in Tulum, Mexico. Tripp has always been like a brother to my son, Levi, instead of a cousin. Tripp asked Levi and my husband, Connell, to play at their wedding.

How exciting it was to be invited to a destination wedding. Tripp and Gabriela are international travelers. We are not. … So when we got the “Pack your bags for the wedding of GABRIELA & TRIPP at Dreams Tulum Resort and Spa – Save the Date,” we were thrilled but at the same time very cautious because we had never been to another country.

The first thing we had to do was make travel arrangements. Tripp’s Mom, my sister Peggy, and I went to SW Georgia Travel in Camilla, and Greg helped us. He was so helpful and assured us that we would love going to Mexico. All travel arrangements were made.

The next thing we had to do was get passports. We went to the courthouse and filled out the paperwork. In a few weeks, our passports came in. Wow, we could now travel internationally! I almost felt like an international spy with my passport as my ticket to adventures.

Levi started playing the guitar when he was 18. Connell has been playing for many years, and he still has his Gibson J-45 that he loves to play. Music has given them a very special father-and-son relationship. They love to jam, and I love to listen to them. So does Tripp. That is why he asked them to play at his and Gabriela’s wedding.

♦ Tonight I’ll be Staying Here with You — Bob Dylan

♦ The House of the Rising Sun (Mexico Style) — The Animals

We were scheduled to fly out on the day before the wedding. With many prayers said, we took a leap of faith and got on the airplane. We had a great flight to Atlanta and then to Cancun. I was able to take many pictures with my cellphone while looking out the window. I saw beautiful landscapes, clouds and even rainbows. Can you imagine, in 2 ½ hours you can be in Cancun from Atlanta? Once in Cancun, we took a shuttle ride to Tulum (Baby Cancun). We had a wonderful driver. We stopped at a store and got beer and Cheetos.

We were so thrilled to be in Mexico and were singing and listening to the Gipsy Kings (“Volare” and “Bamboleo”) during the 1 ½-hour drive. Our fears that we would be held up by Bandoleros were quelled. We were beginning to see how sweet the people of Mexico are.

The resort was absolutely breathtaking! Palm trees, luscious flowers, exquisite fountains, aqua pools, beautiful tiles, and many white and khaki buildings bathed in grandeur. We settled into our rooms and headed for the beach to meet up with Tripp. It was amazing to see how many of their friends were there to be a part of their celebration. A welcome reception was held that night on the beach with a Mariachi band playing Mexican music. They were quite lively and colorfully dressed with their sombreros and embroidered suits. After the beach reception, there were several bands playing at the resort with lots of dancing going on.

Then the big day arrived. The wedding was to be held at the Private Garden adjacent to the Jungle Terrace. Connell and Levi were to play their music before the wedding started as guests arrived. I was the first to be there at the garden, and what pride and joy I had to see them play. They sounded absolutely fabulous! Everyone seemed to enjoy their music as they were waiting for the wedding to begin. At last, all family and friends were there. Tripp was smiling from ear to ear. And then, Levi struck the “Bridal March’s” first chord and there she was.

Gabriela, in all her radiant glory, walking down the aisle with her father.

They said their vows. They were now husband and wife. They started down the aisle as Connell and Levi played Tom Petty’s “Free Fallin’”. After all, when you commit to marriage, you’re just kinda winging it with love as your guide.

Off we went to cocktail hour on the terrace bar and then to the wedding reception on the Sunset Terrace rooftop. We ate, celebrated and danced the night away. Many toasts were made to the bride and groom. What a beautiful couple they are! I had written them a poem entitled “Oceans of Love.” Part of it goes like this:

When you look at sunsets and share your dreams,

Look into each other’s eyes and remember this moment

Because love is eternal and love is yours!

Everyone was at the beach the next day, and some were able to stay at the resort longer than others. When it was time to come back home, we all knew that we had been a part of something special.

When we got back to the airport and entered it, there was another Mariachi band performing. There they were in all of their splendor, performing their hearts out.

When we arrived home, Tripp had texted and said for Connell and Levi to watch for a package he had sent. He had told them many times how grateful he was that they had played. Connell’s came in and there it was: A gig poster commemorating their wedding music performance! Levi had gotten his, too. What beautiful gifts from a nephew to Connell and a brother to Levi!

Yes, much music was made in Mexico. And Tripp and Gabriela have just celebrated their first anniversary. Music and memories … all in the name of love! A once-in-a-lifetime experience.

And, by the way, Connell gave Luke Bryan his first guitar and taught him how to play. Perhaps, another story?

Movie review: 'Antebellum' suggests that there are all sorts of horror stories to tell

Enter your photo for a chance to be published on albanyherald.com