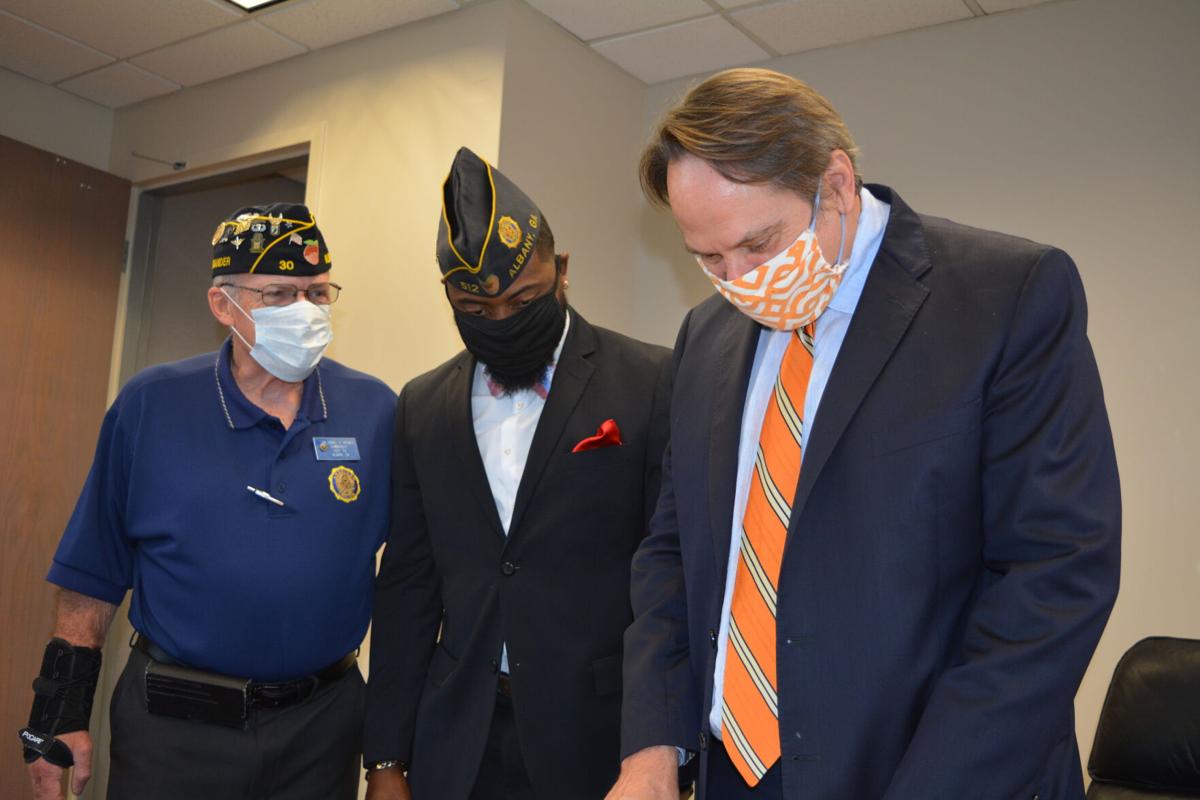 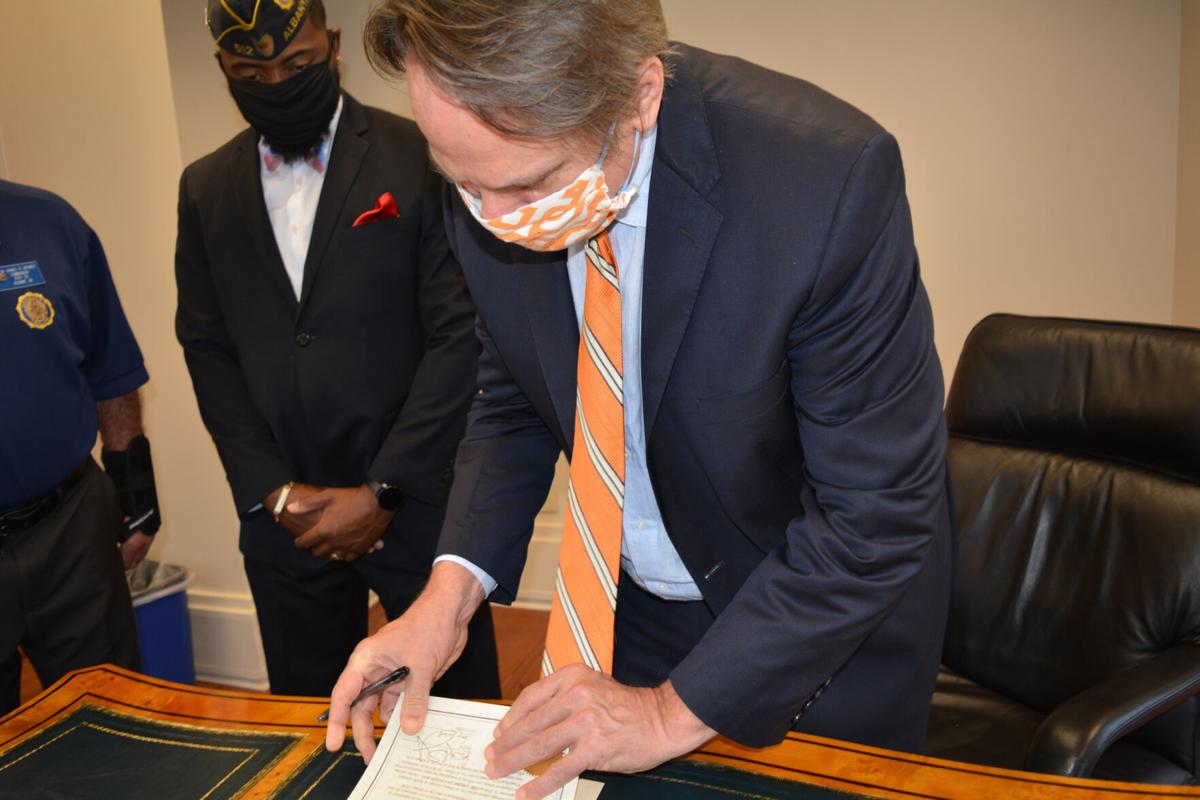 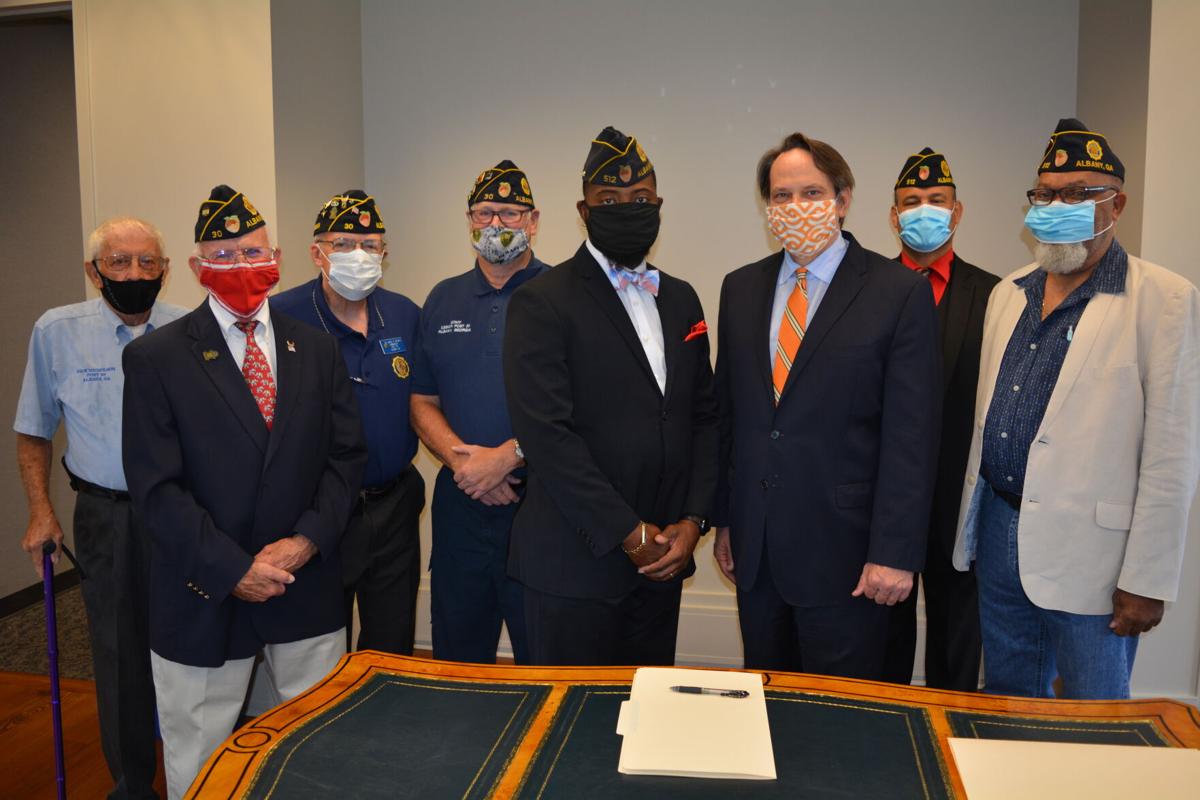 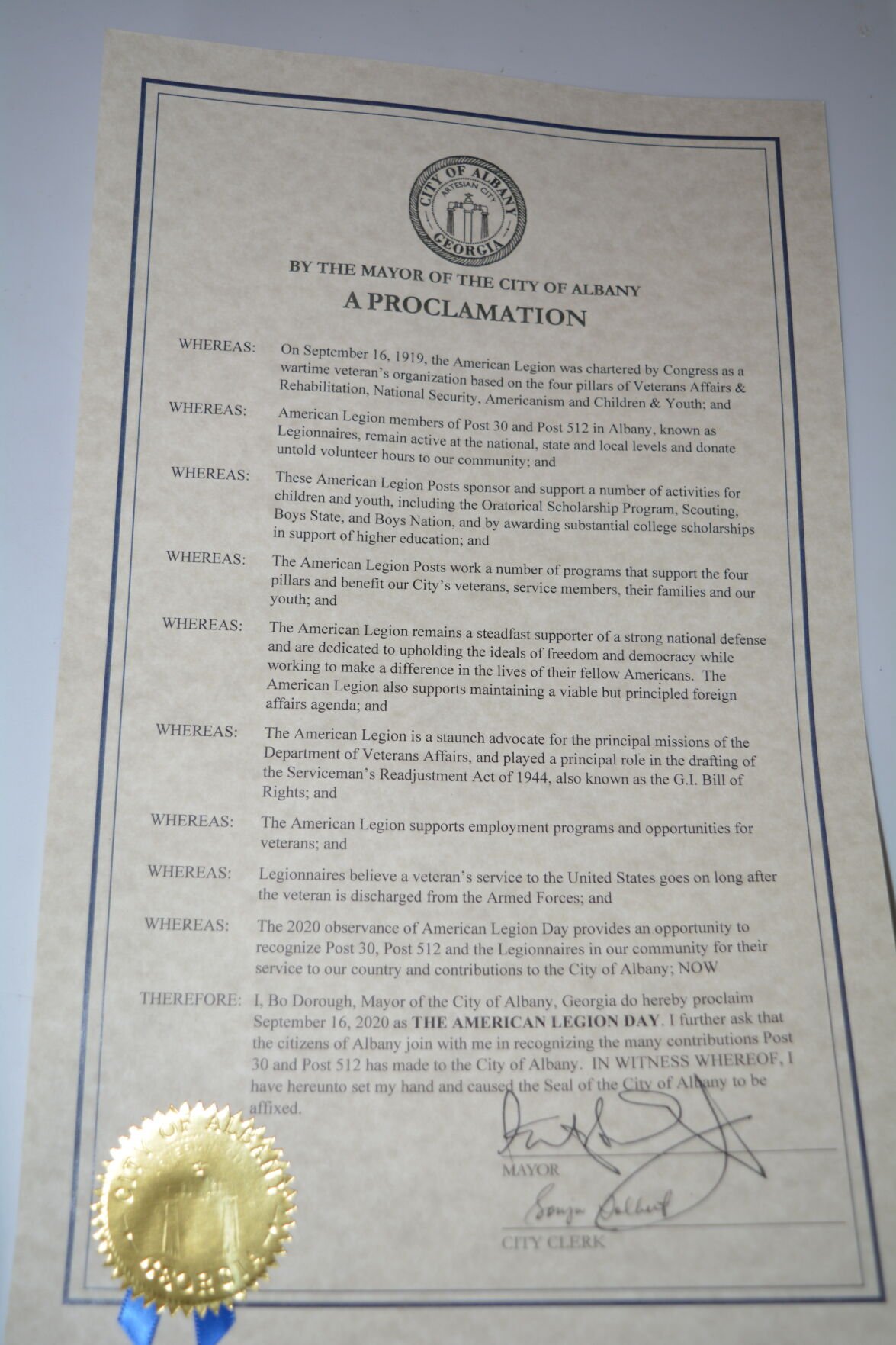 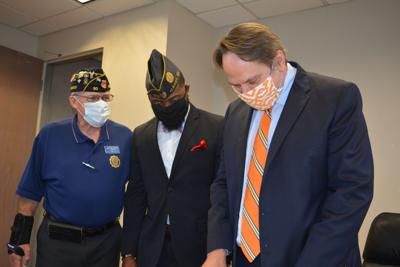 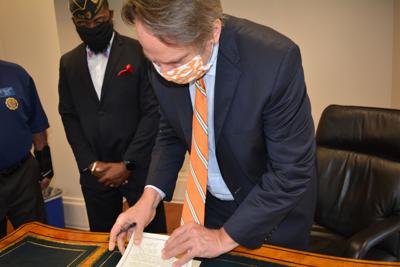 ALBANY — On the eve of one of the most somber days in recent American history, Albany Mayor Bo Dorough signed a proclamation Thursday afternoon designating Sept. 16 as The American Legion Day in the city.

With Legionnaires from both Albany Legion posts — 512 and 30 — in attendance, Dorough signed the proclamation in his office at the downtown Albany-Dougherty Government Center on the day before America remembers the 19th anniversary of terrorist attacks on the Twin Towers in New York City and the Pentagon in the nation’s capital. Two hijacked airplanes were flown into those buildings, leaving 2,606 Americans dead and shattering the illusion of constant protection for a nation that had long held that notion as sacred.

A third airplane was reportedly destined for the White House, but the hijackers were thwarted by brave American passengers who died when the plane was crashed in a field in Pennsylvania.

“I’d like to thank you, gentlemen, for your service and for what you continue to do for our country and our community,” Dorough said after reading the proclamation, copies of which he signed for both Legion groups.

The proclamation recognizes Sept. 16 — the day 101 years ago that Congress chartered the American Legion — as The American Legion Day and lauded the four pillars of the organization’s basis: veterans affairs and rehabilitation, national security, Americanism, and children and youth. Dorough noted in the document that both local posts support veterans programs, children and youth activities, Boys State and Boys Nation, Scouting and educational endeavors.

“It’s appropriate that our community recognize individuals who have not only served this country in the military, but have dedicated years of their lives in service to their community,” the Albany mayor said. “These people who served in combat are responsible for the freedoms we’ve come to cherish, and they are a constant reminder that those freedoms come with a price.

“We need reminders of the great sacrifices these men and women made to protect our freedoms.”

“We’re proud to be celebrating the 90th anniversary of our post; it’s great to be a part of an organization that’s been around that long,” Smith said. “We are constantly looking for veterans to join our post because it gives us all the opportunity to continue to serve.

“It’s my desire to see our Legion post survive through the next 90 years.”

Post 30 Commander Dan Brewer said the members of the Legion organizations are focused as much on the future as the past service of veterans.

“We honor our veterans, but we do so by providing opportunities to serve our young people in the community,” Brewer said. “We try to instill in our young people the sense of patriotism that is so important to our nation. That’s why we were out putting up our Field of Flags today in remembrance of those who lost their lives on 9-11.”

The proclamation penned and read by Dorough says in part:

“Whereas: Legionnaires believe a veteran’s service to the United States goes on long after the veteran is discharged from the Armed Forces; and Whereas: The 2020 observance of American Legion Day provides an opportunity to recognize Post 30, Post 512 and the Legionnaires in our community for their service to our country and contributions to the city of Albany; NOW, Therefore, I Bo Dorough, mayor of the city of Albany, Georgia, do hereby proclaim Sept. 16, 2020 as The American Legion Day. I further ask that the citizens of Albany join me in recognizing the many contributions Post 30 and Post 512 have made to the city of Albany.”

Brewer said a second ceremony, which will include recognition by Dougherty County officials, will be held on Sept. 16.

A 'building distrust' in public health agencies is 'the elephant in the room,' Fauci says