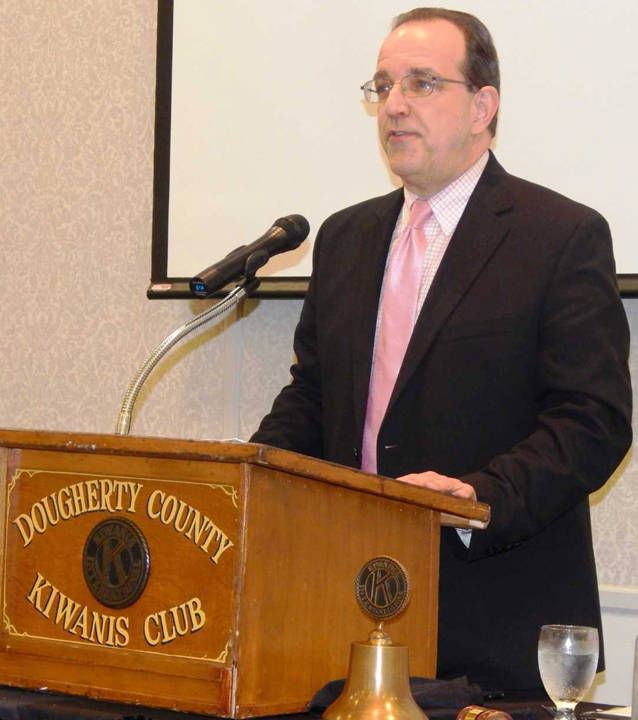 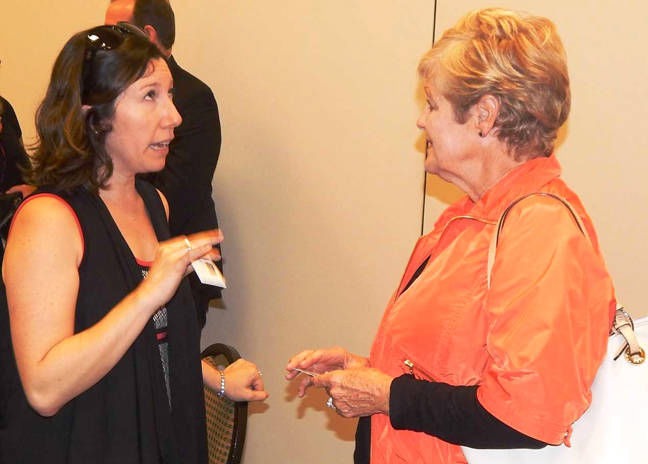 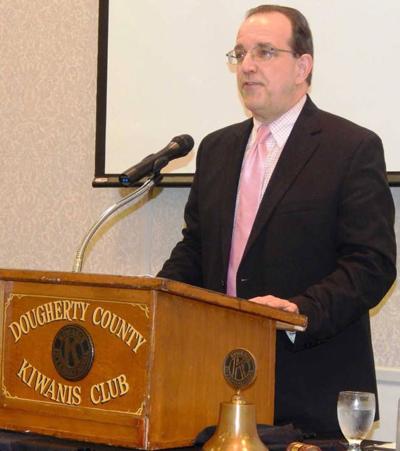 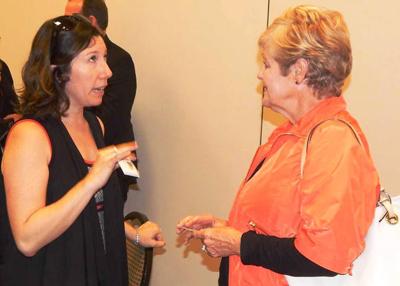 ALBANY — For more than 50 years, the Albany Symphony Orchestra has been bringing concert performances to the community, and the upcoming season promises another lineup of classical and pop delights for symphony-goers.

The symphony plans to release its 2017-18 schedule in a few weeks, but veteran orchestra director Clare Fox Hillard offered a brief overview for the Kiwanis Club of Dougherty County this week. He was accompanied at the luncheon meeting by the ASO’s new executive director, Joelle Fryman.

Hillard began by noting, “We all know the challenges of what’s going on and what needs to be fixed, but I think we need to stop every once in a while and think of what we do have and congratulate ourselves, for supporting the arts community in particular.

“We begin this year with a board of directors that has worked very hard, very diligently. I can tell you now that we are front-end loaded, we are paying for our seasons upfront. This year will happen because it’s funded, and the following year will be funded as well. We are on firm fiscal footing.”

The ASO is working hard at community engagement, Hillard said, and fulfilling its mission “to bring symphonic music to our community.”

“The city acknowledged that when they renovated the Albany (Municipal) Auditorium (and) made it a home for the Albany Symphony,” he said. “It’s historic, it’s downtown. We’re a part of downtown; it’s our home.”

Hillard debunked what he called “one of the myths of classical symphonies,” which is “that we perform music by dead, white European men.”

He acknowledged, “There is a little bit of truth to that,” with performances of works by famous 18th- and 19th-century composers. “But,” he added, “there’s a whole other body of rich, rich, rich music out there, by female composers, female performers as well. There’s a great wealth of music from the Hispanic and Latin community, as well as Asian students who have come to study in this country.”

After skipping last year, Hillard said, the ASO plans to bring back Peppermint Pops, with a twist.

“First there will be a short Peppermint Pops in the early afternoon for small children and their families,” that will include a petting zoo in the auditorium lobby, he told the civic club. “We’ll be using a short film, and the orchestra will provide the music. It’s an animated film called ‘The Snowman,’ which you see often during the holiday season.”

If the performance goes well, it may be a stepping stone to the entry of the ASO into what Hillard called “a new trend among orchestras, to take full-length movies (particularly those by Steven Spielberg), show the movie and have the orchestra provide the soundtrack.”

Hillard said he saw just such a performance of Spielberg’s “E.T. The Extraterrestrial” recently while visiting his daughter and son-in-law in Nashville.

“Big-screen behind the orchestra, orchestra down in front, the original soundtrack performed live by the orchestra,” Hillard said. “One thing is making sure we have the equipment necessary to do that in the municipal auditorium.”

A special event, tentatively set for a Saturday evening in May, will be a swing performance at the downtown riverfront amphitheatre.

Hillard also talked about the symphony’s commitment to being involved in arts education in the community, particularly music education.

“We’re very proud of our partnership with Carnegie Hall and their entire education department,” he said.

The Albany Symphony is one of eight in the country, according to Hillard, that belongs to a Carnegie program called LinkUp, which furnishes and funds a three-year curriculum that includes visual aids for teachers and books for students.

Elementary students will be invited to a morning performance, and through the use of recorders, “A lot of them (students) participate; they’re not just sitting there listening. It also shows them that concert music isn’t only for old people,” Hillard said.

Outreach is a third goal for the orchestra. Hillard said.

“We realize that we are the stewards of a very valuable commodity,” he noted. “We want to make sure it services our area, that is to say, Southwest Georgia.”

The orchestra in the past has journeyed to Tifton, Bainbridge and Americus for performances and would like to visit other communities as well, he added.

Ensemble and chamber performances like those held at the Albany Museum of Art and downtown churches will continue in the upcoming season, the conductor said.

“We’re taking the orchestra out into nontraditional spaces,” he said. “We want everybody to have access to what we have to offer.”

Hillard also urged music lovers to take advantage of Symphony a la Carte, which provides musicians for special occasions such as weddings, anniversary parties, bar mitzvahs and other special events.

Speaking briefly, Joelle Fryman, a West Virginia native, introduced herself and related some of her background and experiences to the club members.

“We want to know what you would like to see from us,” she said. “We are your symphony orchestra. We are here for you; we really want to hear from you.”