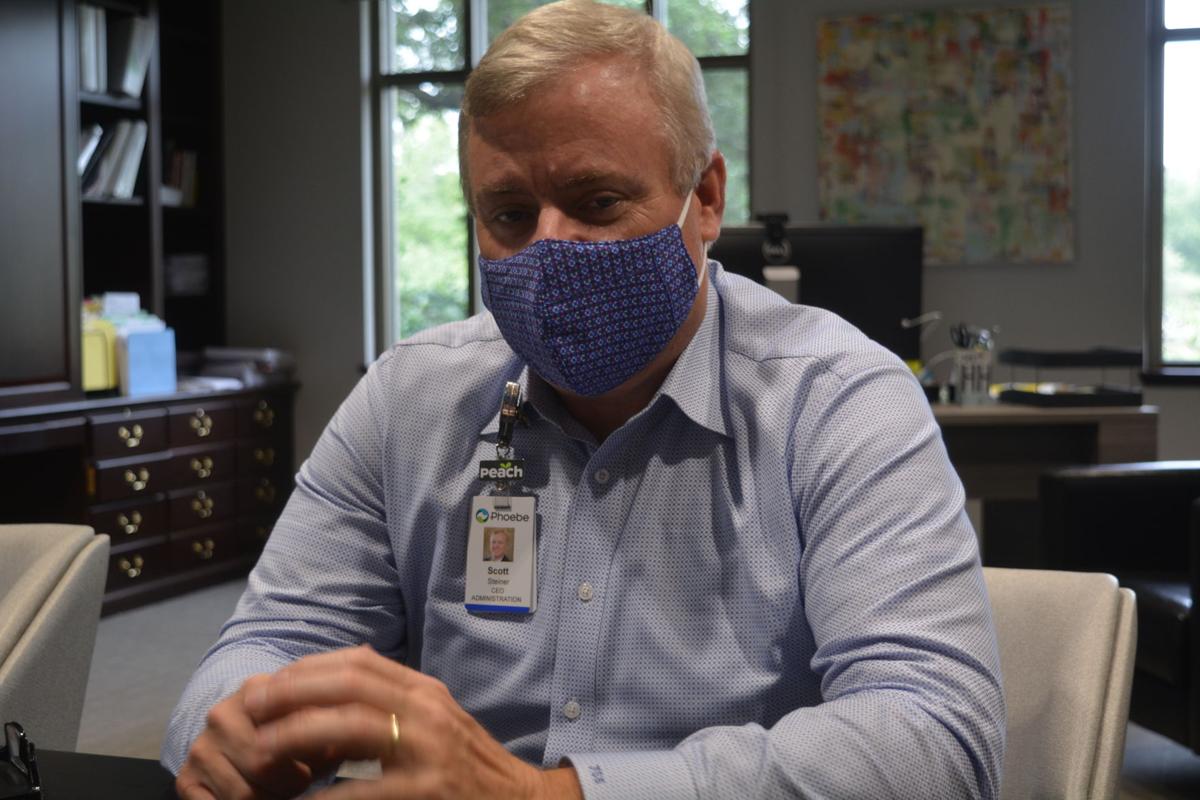 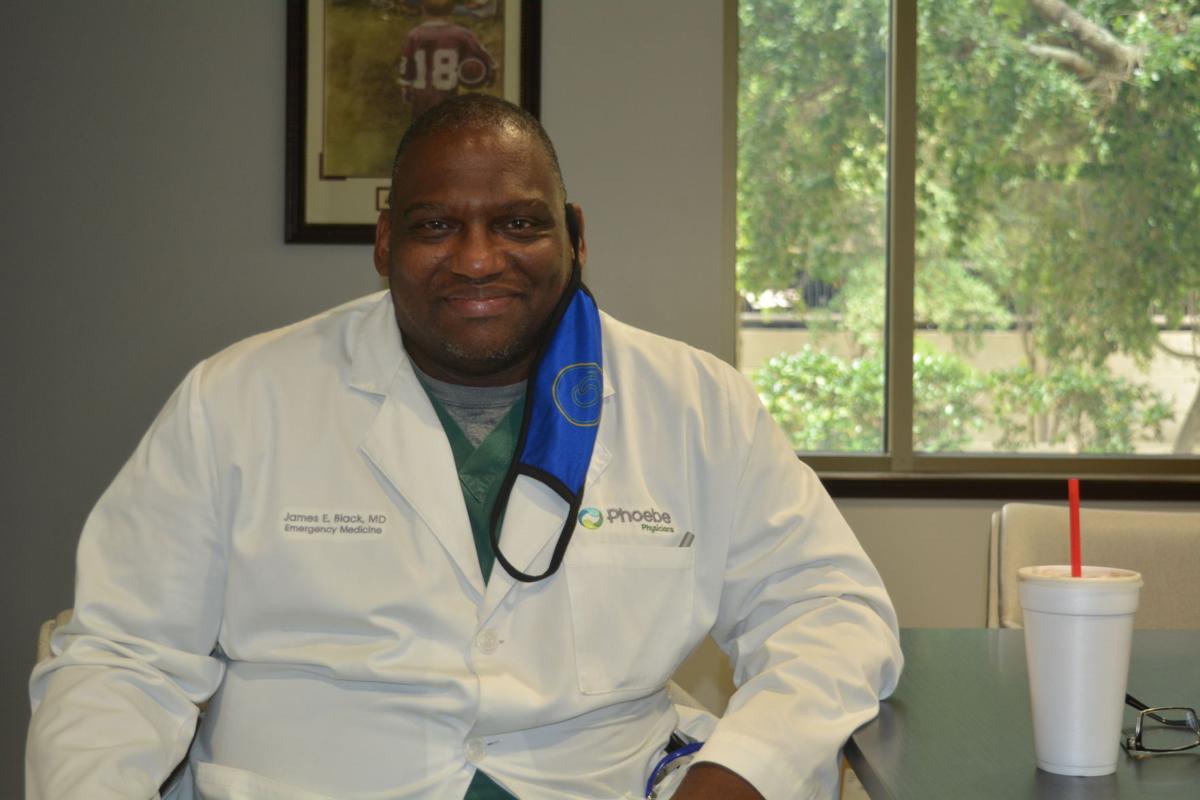 Dr. Eddie Black, the head of emergency medicine at Phoebe Putney Memorial Hospital, said the coronavirus may be mutating as a second wave of the virus impacts the country. 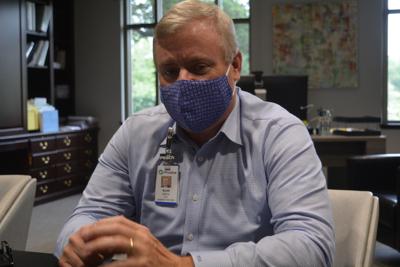 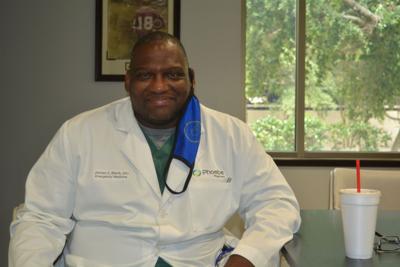 Dr. Eddie Black, the head of emergency medicine at Phoebe Putney Memorial Hospital, said the coronavirus may be mutating as a second wave of the virus impacts the country.

ALBANY — The numbers of new COVID-19-positive patients admitted to Phoebe Putney Memorial Hospital over the last four days are small — 5 ... 3 ...2 ...1 — especially when compared to recent days when dozens of new daily admissions were the norm.

“Places like Tifton, Valdosta, they’re busting with new patients right now,” Phoebe Health System CEO Scott Steiner said Friday as he and Phoebe Director of Emergency Medicine Dr. Eddie Black sat down to talk about what most experts say is the expected “second wave” of the pandemic. “Is it vacations, resistance to the safety practices that have been in place for weeks? The reality is, people don’t know what to believe about this virus anymore.

”We all hear the stories: The 16 girlfriends who went out to a bar in San Antonio and all 16 tested positive for COVID-19. In England, they reported 500,000 people went to the beach to celebrate the start of summer. There are all those stories out there, but the story that I think people should listen to is one about the Great Clips (salon) where all of the hair dressers who worked there tested positive for the virus, but because they wore masks and required their customers to wear masks, not one of more than 400 customers at the shop tested positive.”

Steiner, Black and personnel in the Phoebe Health System certainly know a thing or two about the seriousness of the pandemic that reportedly started in Wuhan, China, and quickly spread around the world. Albany-Dougherty County became one of the world’s most serious hot spots early after the virus was confirmed in Georgia, reportedly because of two large funerals attended by individuals who were not aware that they had the virus. In fact, the first person in Georgia to die of the COVID-19 virus was treated at Phoebe before being sent to Atlanta to receive the care of his personal physician.

But Phoebe’s number of COVID-positive patients started decreasing in early May and had dropped to 31 last week, a week in which no deaths were recorded and three consecutive days passed with no new admissions.

Almost as suddenly as the first wave of the virus, though, the second wave has hit the country with a vengeance. The Centers for Disease Control and Prevention announced that two of the largest days of new COVID-19-positive cases in the country were recorded this week, and Florida, Texas and Illinois have seen dramatic increases in positive cases. The inevitable second wave that many health professionals feared when businesses that had shut down to stop the spread of the virus re-opened apparently has the nation in its grip.

”There are so many things about this virus that we don’t know yet,” Black said. “Just look at the things that have been said about the virus since it first appeared: ‘It’s an old people’s disease’ ... ‘Black people can’t get it’ ... ‘Young people are not at risk’ ... All of those things have proved to be wrong. And there is fear that maybe the virus is mutating and affecting the population in different ways now.

”One thing that I believe has been proven is that no individual or no group of people is immune. That’s something we’ve had to find out the hard way, by living through this.”

Fifty-one patients at the Tifton health system have died from complications related to the virus.

Both Steiner and Black say the Albany-Dougherty County numbers have not increased as significantly as nearby communities because of the “early buy-in” of local citizens when health care and elected officials stressed preventive measures.

“One of the things that I think has been vital in our local efforts to contain the disease was Scott Steiner’s decision to be transparent through this whole process,” Black said. “While other hospitals and health care facilities have refused to release information, from the beginning it’s been, ‘Here’s the situation in Albany.’

“I think that helped us build a trust and rapport in the community that helped with the buy-in when it came to wearing face masks, frequent hand-washing, maintaining proper social distancing and avoiding crowds. People across the country are incorporating that model into their master plans now. And I firmly believe we wouldn’t be where we are now if that hadn’t been part of our protocol.”

Steiner said people who speak of “Constitutional rights” not to wear masks or follow other suggested practices are doing more to endanger others than they are themselves.

“I get that people don’t like to be told what to do, but this is for protection against a virus that’s not going away any time soon. That concerns me. I am working on a letter to send to our local officials asking them to, when the governor’s emergency order expires, consider requiring the wearing of masks when people are out and about. We have to keep doing the things that have worked for us throughout this pandemic.”

I never thought there would be a benefit to Albany getting passed over for I-75 proximity, but here it is.

People will blame the re-opening of businesses for the surge in the virus, but the truth is stupid irresponsible people not being safe is the reason. Many people going to bars, getting drunk and at that point you are out of mindset and no telling who they get in contact with. Then there is that man in Texas with the big birthday party and got 17 of his relatives infected. Then there is the beaches......They gave the green light to re-open, not the green light not to practice safe procedures.

Mississippi's governor just mandated masks in public gatherings and school. The state is top 5 for coronavirus cases per capita

How to help Beirut explosion victims