Log In Register
You are the owner of this article.
Edit Article Add New Article
You have permission to edit this article.
Edit
Home
News
Sports
Opinion
Features
Community
Classifieds
Multimedia
Obituaries
e-Edition
Help
1 of 7 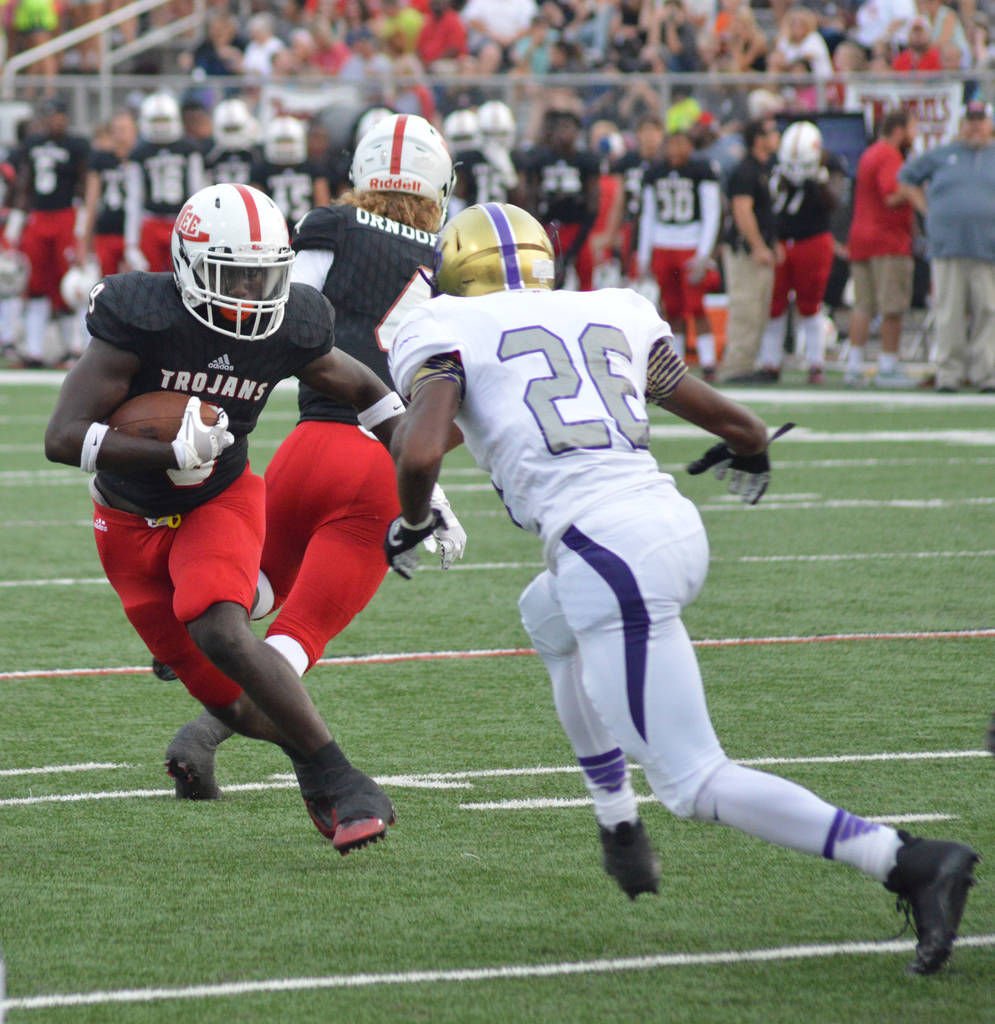 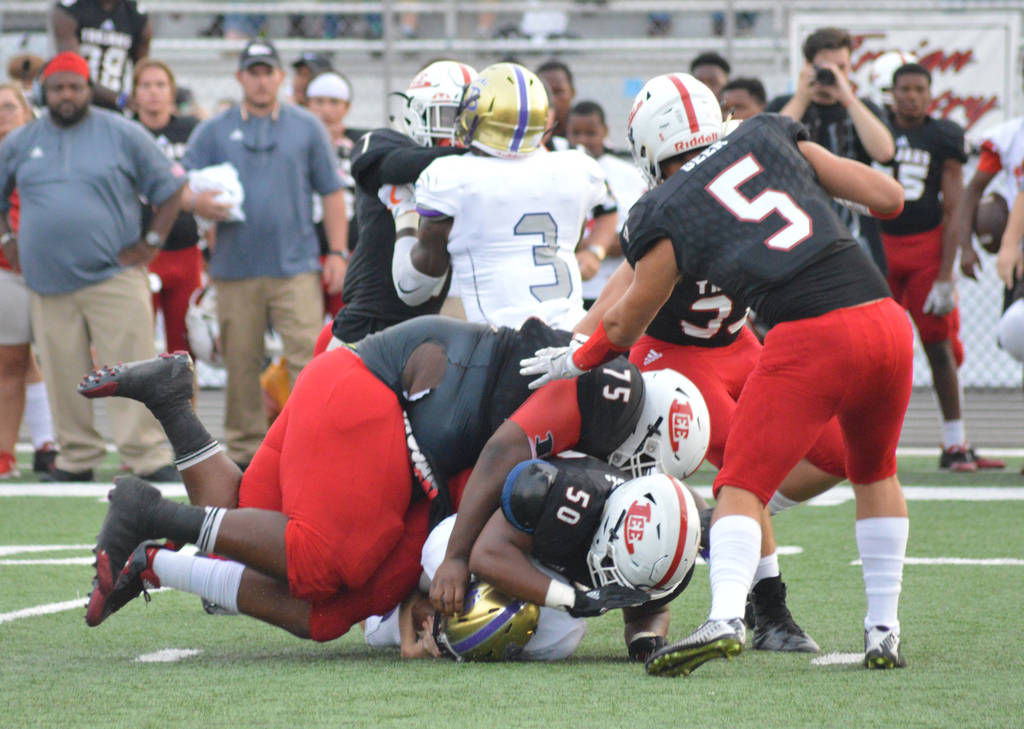 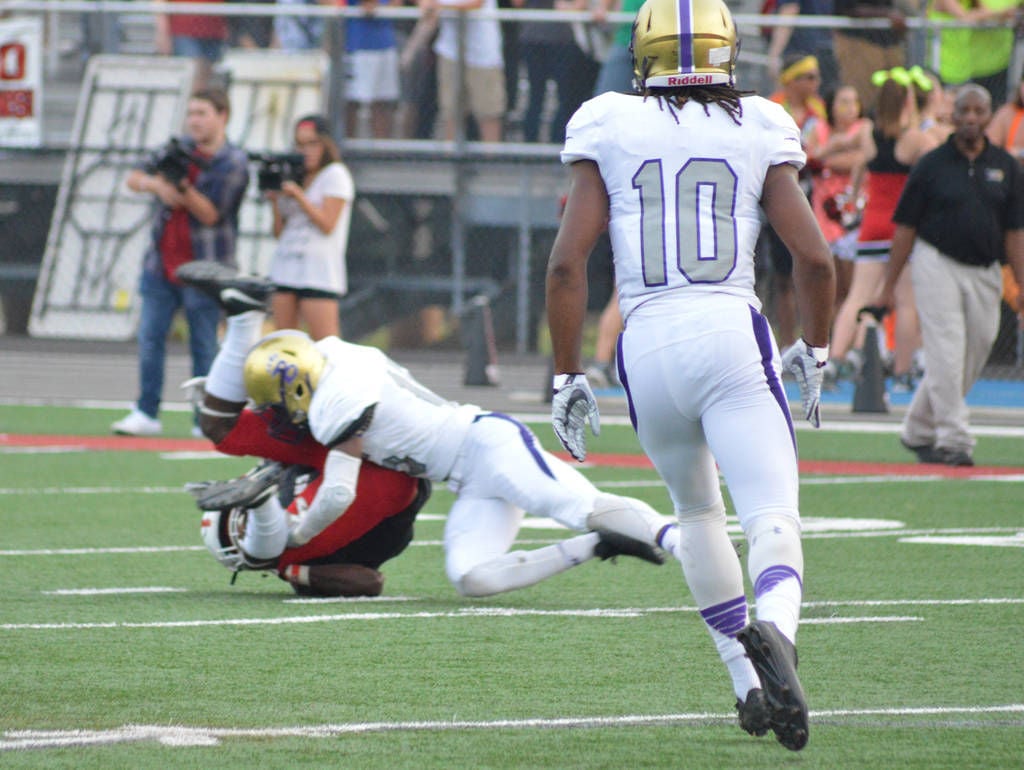 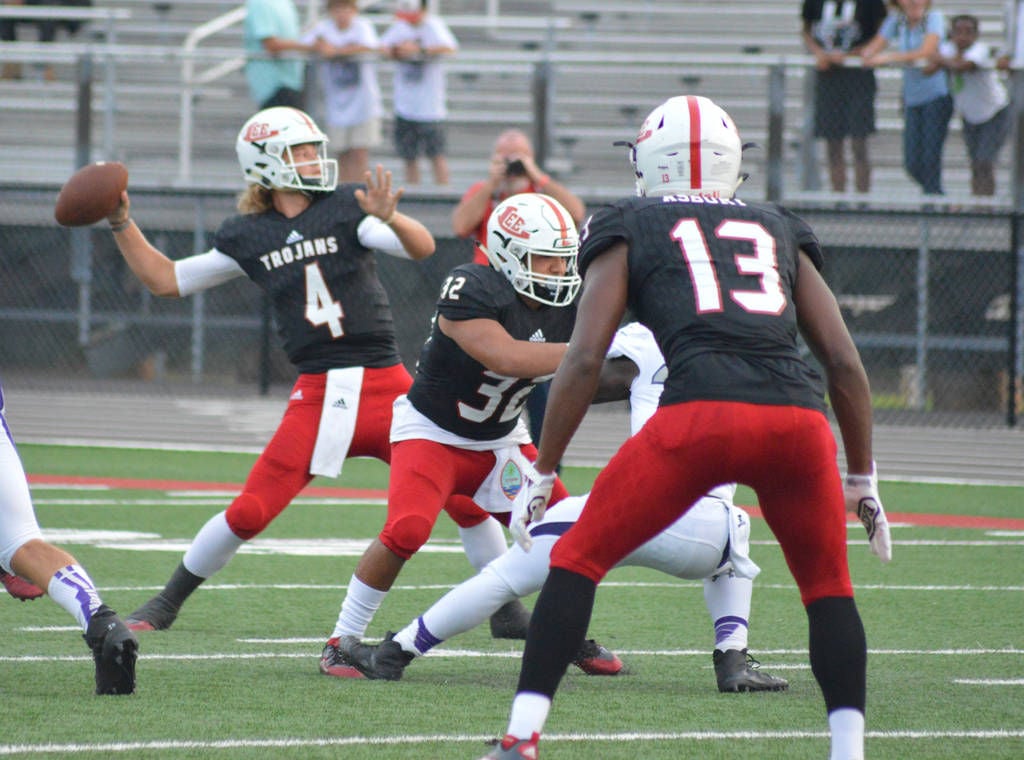 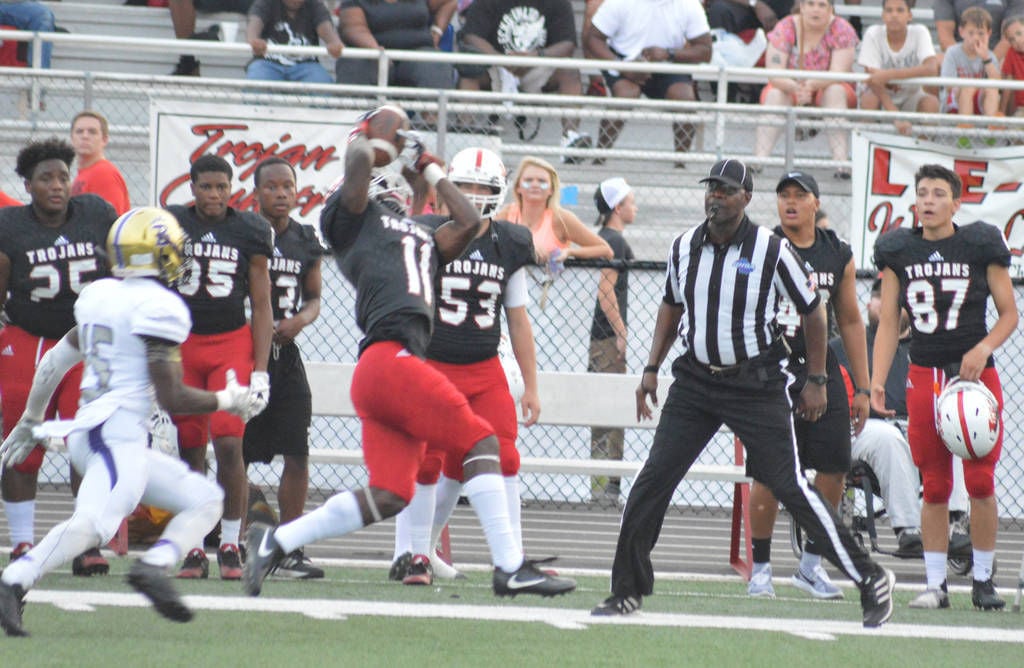 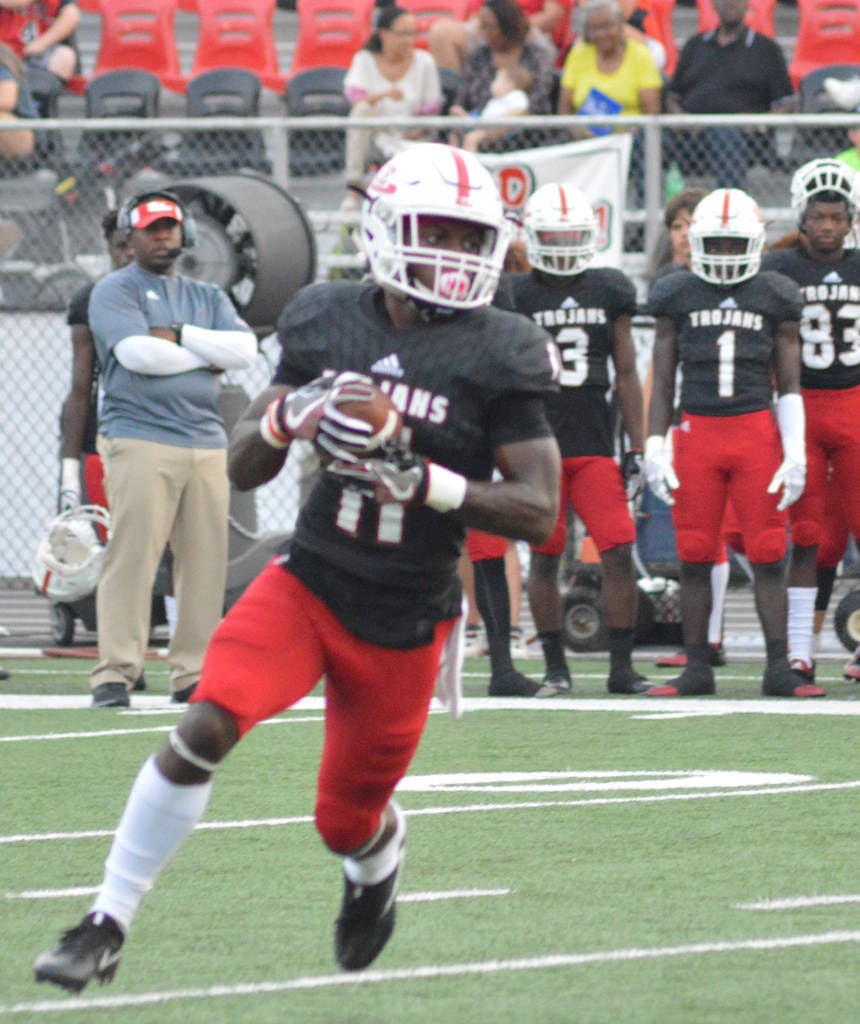 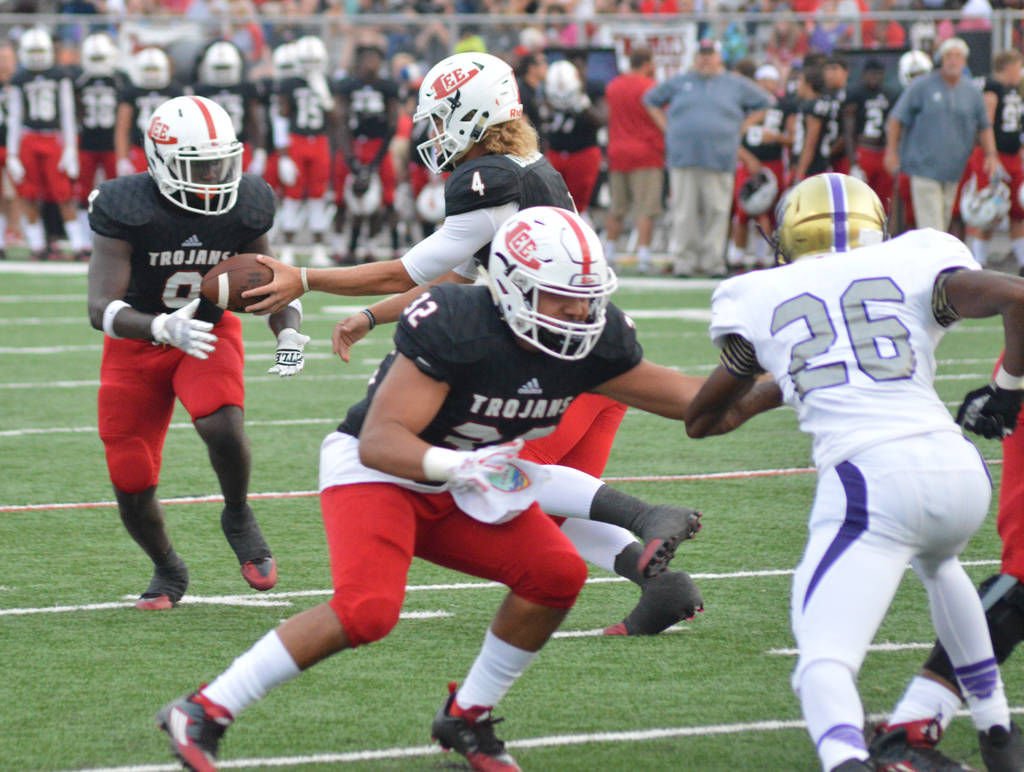 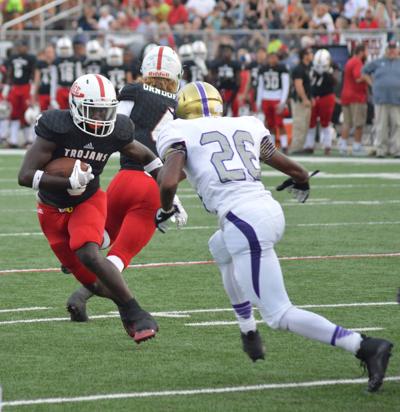 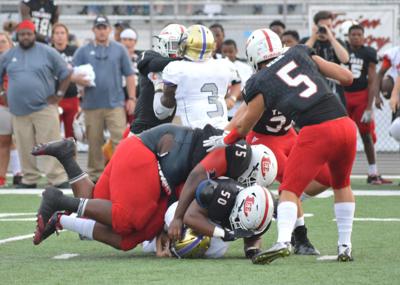 LEESBURG — For all of the attention Lee County’s highly recruited defensive backfield received during the offseason, the performance of the unit as a whole has been a bright spot thus far.

With players like Michigan recruit Otis Reese picking up the recruiting headlines, others have also stepped up and made big plays in the first two weeks of the season.

Lee County’s defense turned in two big momentum-changing plays late in the first half Friday against Bainbridge. A strip-and-score by Baron Hopson and a pick-six by Tay Mayo in a span of a little more than four minutes set the tone for the Trojans’ 38-13 victory.

“We’ve got tons of respect for this team, but we’re coming out here to play,” Hopson said of Bainbridge. “We busted heads, we made plays.”

A week after the Trojans’ defense came up with two critical fumble recoveries and a fourth-down red zone stop against Mary Persons that set up the game-winning score in a 21-17 win, they came up with five takeaways against a team that is expected to be in the mix for the GHSA Region 1-5A title.

Hopson, a ninth-grade linebacker, came up with the game’s first points with 5:34 to go in the second quarter when he stripped Bainbridge’s highlight running back, Florida commit Dameon Pierce, at the Bearcats’ 5 and ran the ball into the endzone.

“We put in a couple of new defenses this week; we had to lock him down,” Hopson said. “We knew he was one of the best.”

Mayo, a junior defensive back, made it a two-score game with 1:29 to go in the second quarter on his 25-yard return of an intercepted Mark Loeffler pass. He added another interception in the second half.

With the two defensive scores posted, Lee County’s offense found some room to operate. Jase Orndorff threw two touchdown passes, a 12-yarder to Josh Asbury just before halftime — set up by a Tiyance Dewberry interception — and a 54-yarder to Ty Terrell at the end of the third quarter. Nikko Cruz ran in a 1-yard score in the fourth, and Austin Beaver added a late 25-yard field goal.

Orndorff completed 15-of-30 passes for 210 yards, with Terrell catching six of those passes for 113 yards.

“Offensively, we have some things to clean up, but they kept fighting and got better as the game went along.”

While Lee County’s defense had Pierce bottled up for much of the first half, he did break a few runs in the second half. He flipped the field with a long run to start the fourth quarter, setting up a 23-yard scoring pass from Loeffler to Adrian Cooper.

Then, following a Lee County special teams miscue in which the Trojans failed to field a pop fly kickoff that fell between return team members near their 25, Bainbridge drove to set up a 1-yard Pierce touchdown run.

“The bottom line is, (Lee County) rallied to the football,” Bainbridge head coach Jeff Littleton said. “They’ve got some great players, but they play as a unit. For the most part, our defense did the same thing. We gave up some big plays that we shouldn’t have gave up, but that was due in part to Lee’s receivers and their quarterback doing a good job and their offensive line giving them time to throw it down the field.”

Lee County continues its strong start to 2017 with a win over the Bainbridge Bearcats.

Cardinals' Yadier Molina first to catch 2,000 games for one team