Follow all the latest coverage of the coronavirus outbreak in Albany and around the world at albanyherald.com/coronavirus.
1 of 2 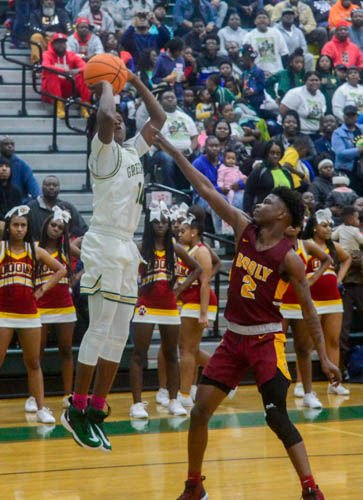 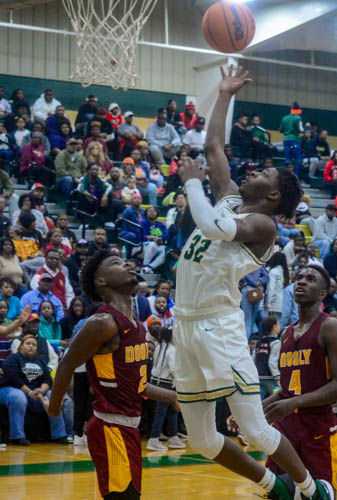 Terrell County’s Recardo Simmons (32) scores after stealing the ball on a full court press during the second quarter of Wednesday night’s game against Dooly County. Simmons and the Greenwave will play Friday afternoon at Valfdosta State in the state semi-finals against top-ranked Treutlen County.

Terrell County’s Recardo Simmons (32) scores after stealing the ball on a full court press during the second quarter of Wednesday night’s game against Dooly County. Simmons and the Greenwave will play Friday afternoon at Valfdosta State in the state semi-finals against top-ranked Treutlen County.

Terrell County senior Jamarkeis Allen drilled four 3-pointers during a second quarter run to help the Greenwave roll over the Dooly County Bobcats Wednesday night in Dawson and claim their spot in the GHSA Class A Final Four. The Greenwave took the win 73-55 using an intense defense that shut down the high-powered Dooly County offense and will now play Friday at Valdosta State for a birth in the state championship game.

“I’m just thankful,” said an emotional Allen after the game. “I kind of feel like I have let my team down this year, so I am glad I came up big tonight and now we are in the Final Four!”

Allen did come up big, but so did the rest of his teammates. The Terrell County defense jumped on the Bobcats early and never let up, even with less than a minute to play and up by 15 the Greenwave was still racing toward the ball on defense.

The intense full court pressure led by Keborian Stephens and Recardo Simmons up front created pressure that time and time again led to bad passes by the Bobcats or created numerous turnovers with travel calls and simply not holding onto the ball. The Greenwave was all over the floor and right in the face of the Bobcat players anytime they had the ball. That defense helped create a 21-point lead in the second quarter thanks to those turnovers.

Dooly was strong inside very early in the game and created concern when Terrell’s inside big man Kentravion Grier had to go the bench early with two fouls. But the speed and intensity of the defense just turned up another notch and on back-to-back steals by Stephens and Simmons put in points that gave the Greenwave a 10-7 with 3:36 remaining in the first. That defense kept up the pressure and Terrell led 19-8 at the end of the first.

Allen hit his first 3 from the top of the key to extend the lead to 28-10 early in the second quarter and Dooly called time to try to slow down the Greenwave, but a couple of possessions later Allen drilled a three from the corner to put the lead at 31-10.

Dooly did calm down in the second quarter and started chipping away at the lead. Bobcat freshman Jamari Sanders hit a free throw with just under seven seconds remaining in the half to close the gap to just eight points, but Allen swished a long three just across the half-court line for another three as time expired to put the Greenwave ahead 45-34 at the half.

With Grier back on the court in third, the Greenwave extended that lead to 16 when he hit two baskets, but Dooly wasn’t finished. A three from Dooly freshman John Brown followed by a three from Eric Ivory closed the gap to only six – 51-45. Terrell County head coach John Davis called time and got his players refocused. The Greenwave scored the last six points of the quarter, including a long three from Simmons as the third quarter ended.

The Greenwave got two more baskets to start the fourth to push the lead to 61-45 and Dooly called time to stop the rally, but this time, the Dooly players seemed resigned to their fate. Terrell Senior Ahmari Johnson slammed home two points that brought Greenwave fans to their feet and Demarion Lattimore slammed one home a few moments later and it was obvious the game was done.

All five of the Greenwave starters notched double figures. Allen led with 19, followed by Stephens with 15. Shontavion Bowens scored 11 while Grier and Simmons each added 10.

Third-ranked Terrell County will now play top-ranked and unbeaten Treutlen County (29-0) Friday at 4:00 p.m. at Valdosta State. The Treutlen Vikings beat Lincoln County 78-77 Tuesday night to advance to the final four. The only common opponent for Terrell and Treutlen this season is Dooly County. The Vikings beat the Bobcats 72-64 early in the season.

Have you personally been affected by the novel coronavirus outbreak?

Ryan Reynolds in talks to star in Dragon's Lair