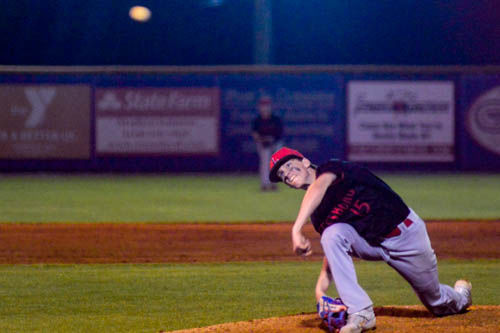 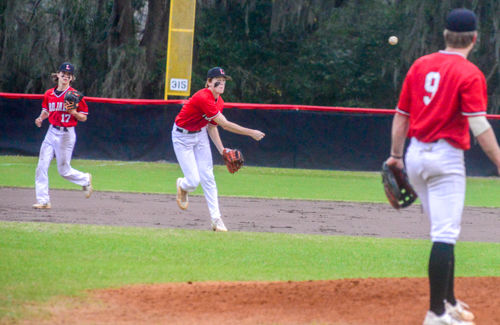 Lee County third baseman Luke Addison throws out a runner from third and Hill Corley (9) and Cameron Paul (17) react during a 2020 game against Tift County. 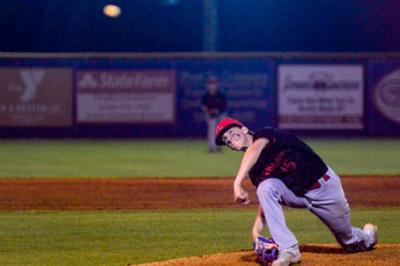 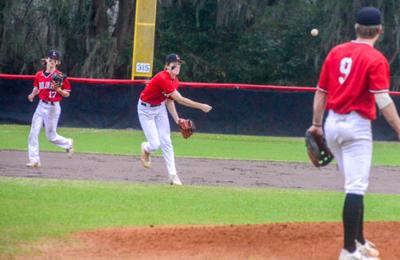 Lee County third baseman Luke Addison throws out a runner from third and Hill Corley (9) and Cameron Paul (17) react during a 2020 game against Tift County.

“It had been about 335 days since everything was canceled last spring,” Trivette said. “It was hard, but now we are back on the field and I am absolutely excited to be able to play. Waking up with butterflies on game day and then working to get the field ready to play, it brought a smile to my face. I can’t tell you how good it felt to get ready to play.”

The pandemic is far from over so Trivette and the Trojans are doing everything they can to make sure they have a full season. The players are required to wear face masks on the bus, in the locker room and in the dugout, fans can attend but are asked to wear a mask, sit only with immediate family and to social distance as much as possible. Even with the precautions, the Trojans do have players in quarantine right now. Trivette said he has wondered if he would be able to field a team some days because of quarantines.

“One day we had nine players in quarantine, “ the coach said, “so then you are scrambling around to fill spots to be able to play. That was our worst day with quarantines, so hopefully it won’t happen again. You can protect them (the players) while you’re on the field, but when they leave you don’t know what they are going to run into.”

When the call came down last March to end the season, the Trojans were rolling with a 13-1 record and that decision ended the high school careers of four of Lee County’s best — Seth Nelson, Chase Sommers, Hill Corley and Kyle Cloud.

“We only had four seniors on the team, but they were very integral parts of the team,” Trivette said.

The Trojans have nine seniors this spring, led on the mound by Smith Pinson, Drew Dixon and Chandler Cannon. Pinson, who also played quarterback, is recovering from a football injury, but Trivette said he believed Smith was nearly 100 percent and was scheduled to make his first appearance Saturday in Jesup against Wayne County. Pinson is committed to play college baseball at Kennesaw State. Trivette said some of the other eight seniors are getting looks by college recruiters, but Pinson is the only one committed now.

While the team may not have a bat to replace last year’s senior sluggers, Trivette said he is counting on the offense to be strong with the bats of outfielders Luke Addison, Kaden Wilson, Luke Powell, and Cooper Ray. One thing Trivette is watching is to see who takes the starting role at first base. Two of Lee County’s offensive linemen on the football team are battling for the first base spot on the baseball team. Jeff Bryan and Owen Greene are both working to get time and at-bats from first base.

In the opening season loss to Bainbridge, Ray had two hits and two RBIs. Luke Powell also had two hits for the Trojans.

While the Trojans are traditionally a force in region 1-AAAAAA, there will be ample competition. Trivette said Houston County is loaded with a strong pitching staff, Valdosta has a big group of returning seniors and Northside always brings a scrappy, tough team each year. The Trojans won the region in 2019 and made it to the Elite Eight.