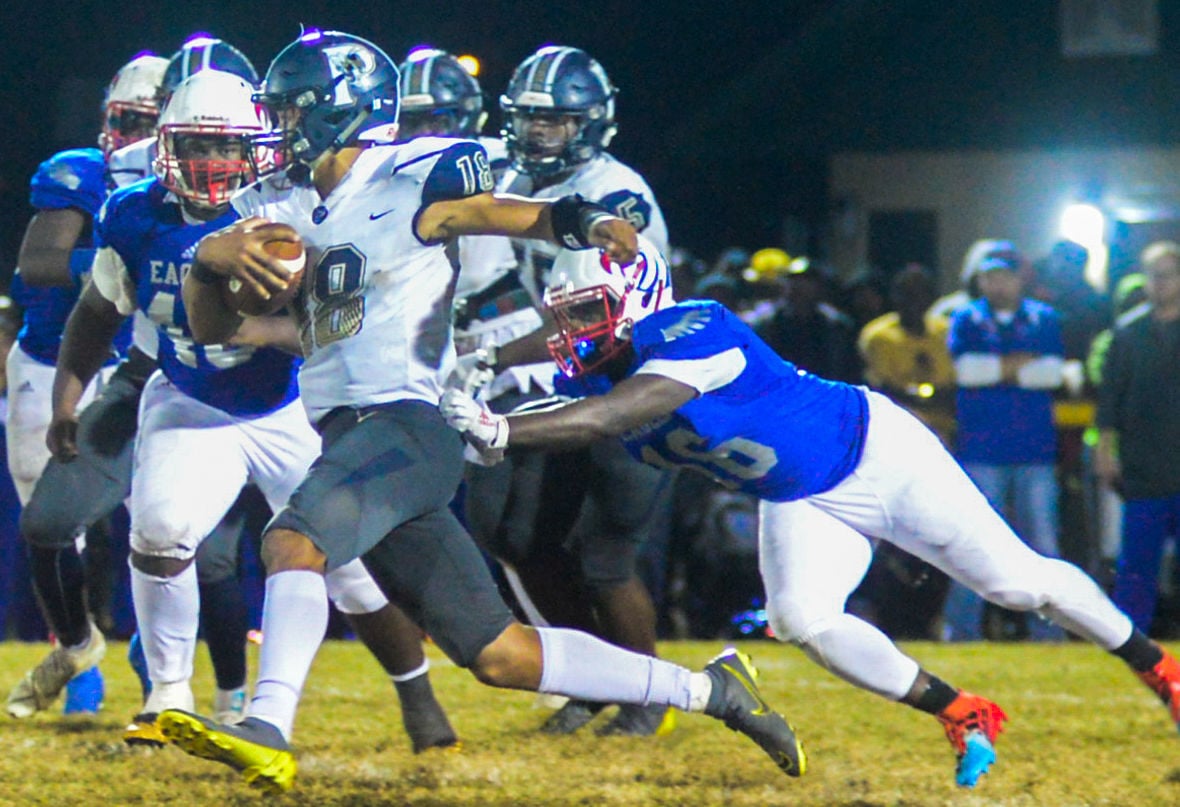 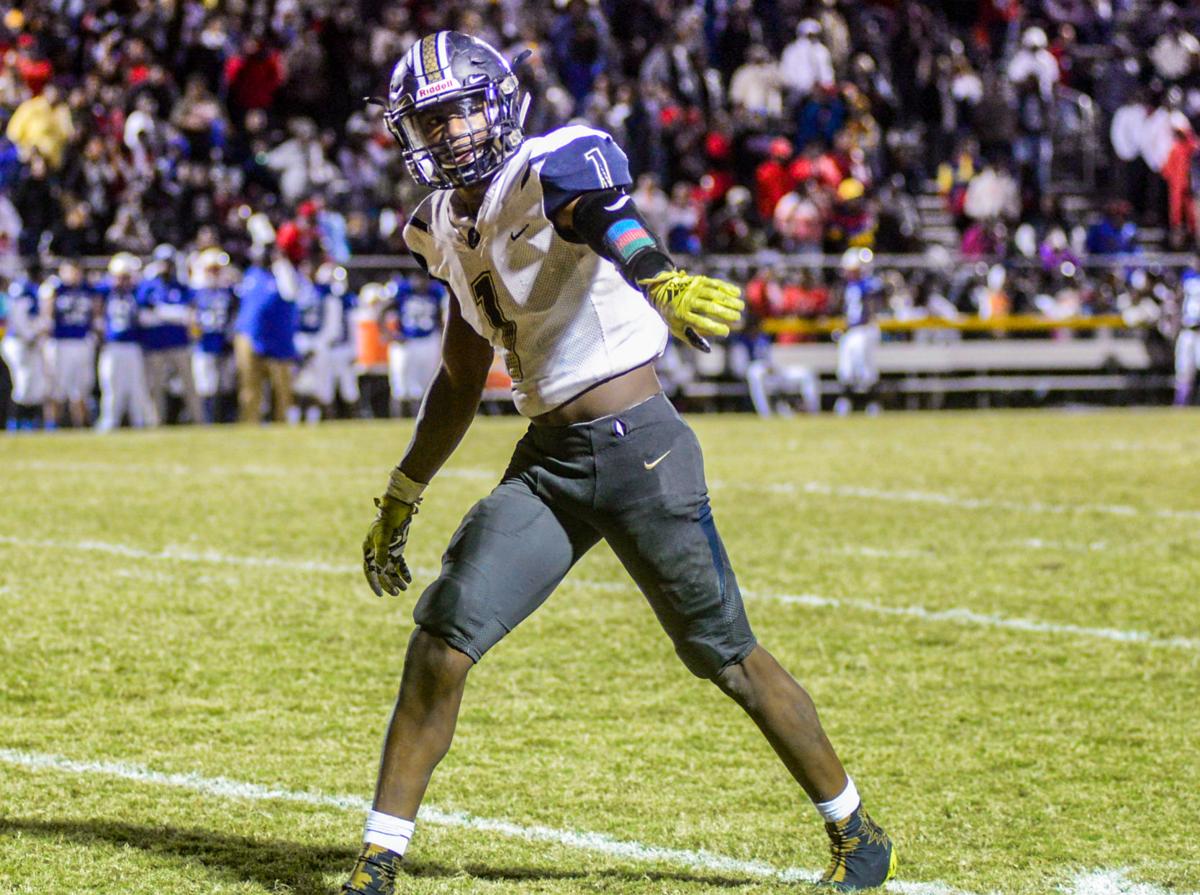 Pelham senior Reggie Walker recovered a fumble in the end zone during the third quarter and picked off a pass during the fourth quarter to stop two Mitchell County scoring drives and help Pelham beat the Eagles 31-20 to advance to the state semifinals. 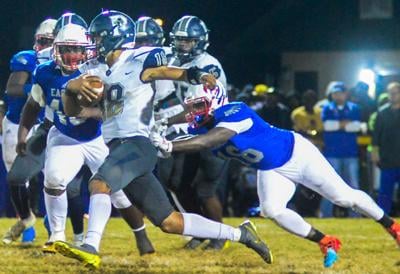 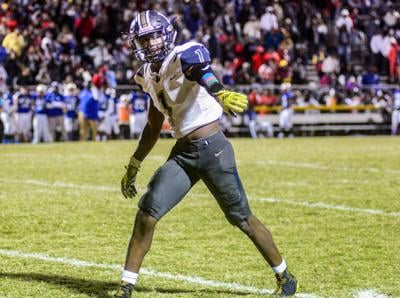 Pelham senior Reggie Walker recovered a fumble in the end zone during the third quarter and picked off a pass during the fourth quarter to stop two Mitchell County scoring drives and help Pelham beat the Eagles 31-20 to advance to the state semifinals.

Redemption. That was the word of the week for the Pelham Hornets last week as they prepared to enter the second round of the “Backyard Brawl” against arch-rival Mitchell County. Both teams were 10-1 and looking for a birth in the state semifinals and the third-ranked Eagles had to be favored after knocking off Pelham three weeks ago in the regular season finale 36-28. Though the coaches wouldn’t talk about it until after beating Wilcox County last week, the Hornets had their sights set on a rematch with the Eagles once the playoff brackets were announced. And the Hornets were ready. Especially senior Reggie Walker.

Walker snapped up a fumble in the end zone to stop one second half scoring opportunity for the Eagles and then picked off a pass late in the game to end another chance the Eagles had to score and give the Hornets the “redemption” they were looking for.

Pelham dominated the first quarter and went up 17-0 early in the second quarter then got the game saving interception from Walker in the fourth quarter to hold off the surging Eagles and advance to the semifinals by a 31-20 final score. Last time the two teams met Mitchell County took advantage of five Pelham turnovers. Friday night the Hornets did not turn the ball over all night and took advantage of three interceptions and the fumble in the end zone by Mitchell County.

Pelham owned the first part of the game and the first three possessions of the game led to Pelham points. Yahir Rios booted a 20-yard field goal on the first Hornet drive after the Eagles finally stopped the Hornets inside the six-yard line. But the Hornets put two touchdowns on the board before the Eagles got clicking.

Quarterback Kendrick Patterson hit Jermaine Johnson with a seven-yard pass for a touchdown and then five plays into the second quarter, Darrell Starling raced around the right side to score on a 12-yard run as the Hornets dominated. Pelham used a ball control offense with long drives all night long to keep the Mitchell County defense on the field, while the Eagles got back into the game with big plays.

The first big play for Mitchell County came midway through the second quarter when quarterback James Thomas connected with Malcom Jones for a 70-yard touchdown pass and then hit him again with a two-point conversion pass to close the gap to 17-8. The Eagles closed the gap to 17-14 in the third quarter when Thomas broke loose for a 57-yard touchdown run and the momentum in the game had shifted to the Mitchell County sideline.

But the experienced Hornets did not wilt. Pelham took the ball at the 18-yard line and drove 82 yards for another score, capped with a Patterson touchdown pass to Jeremiah Stewart with 4:19 remaining in the third quarter. After Rios’ kick the Hornets led 24-14.

The Eagles were determined as well and quickly moved down the field led by Quantavious Hunter and Thomas. Mitchell County’s Kentrell Williams caught a pass where his feet were in the end zone as he fell forward, but the ball was not, and the play put the Eagles at the two. Two plays later the Eagles crossed the goal line but fumbled the ball and Pelham’s Reggie Walker picked up the fumble and ran out to the 10-yard line before being knocked out of bounds.

Williams got his touchdown pass for the Eagles on the next possession when he scored on a 17-yard pass play with 5:37 remaining. After the two-point conversion failed, the Eagles trailed 24-20, but definitely had momentum. The Eagles quickly forced a three-and-out for the Hornets and Pelham had to punt. Pelham punter Doug Curles nailed a beautiful punt for the Hornets that put the Eagles back at the 25 with 3:47 remaining. Hunter made a couple of plays but then went back to pass and Walker jumped in front of the pass to stop the Eagles and give Pelham possession again. A few plays later, Patterson secured the win for good for the Hornets with an eight-yard run around the right side and the Pelham sideline began celebrating.

The sixth-ranked Hornets will now travel to Buena Vista to take on fifth-ranked Marion County (10-2) who beat Lincoln County 28-21. In the other semifinal, second-ranked and defending state champion Clinch County will face nemesis and top-ranked Irwin County. The winners will play for the state championship in Atlanta the following week.

MARK ISRAEL: HB 545 is a 'Right to Harm' Bill and won't help farmers