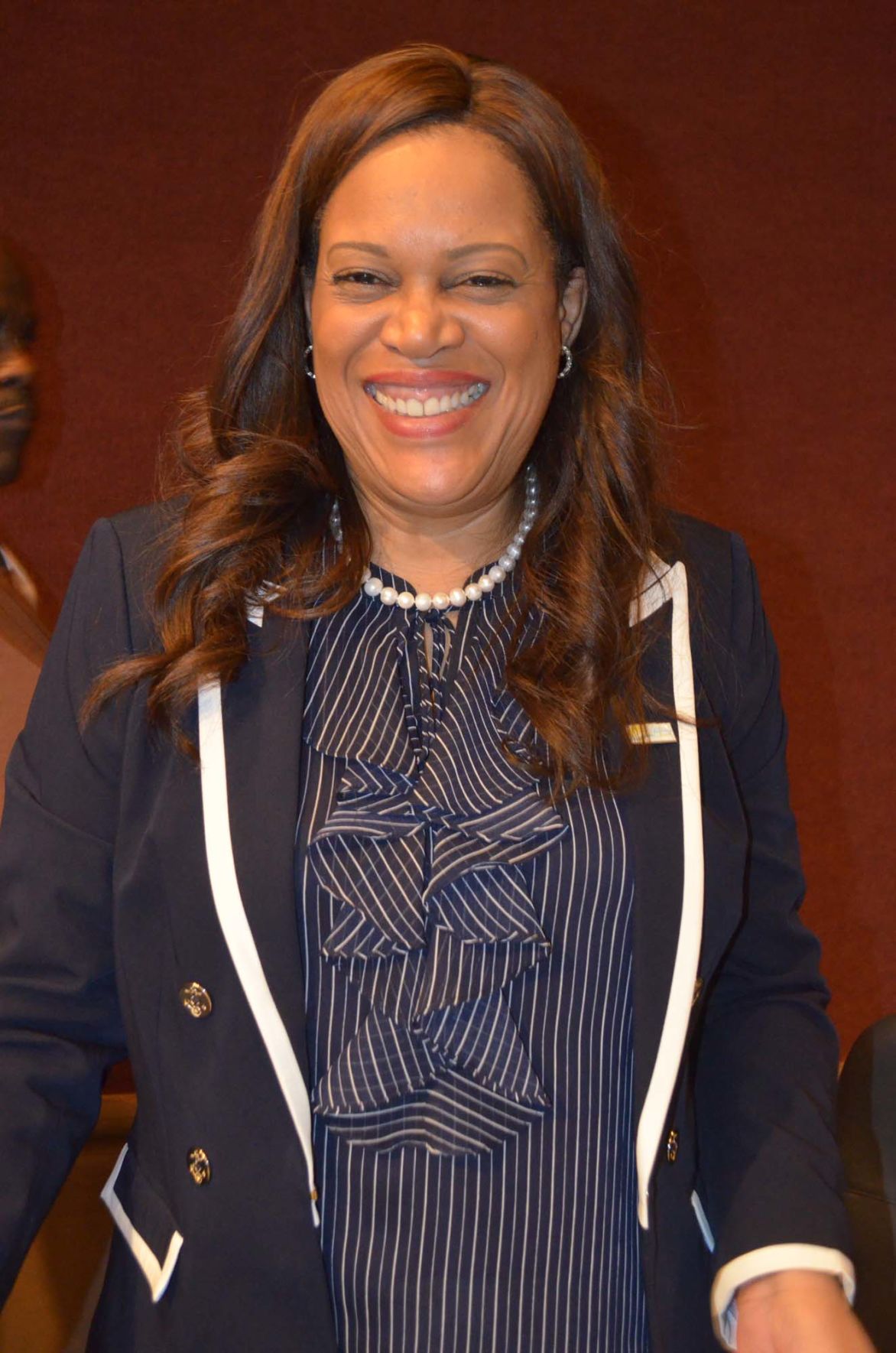 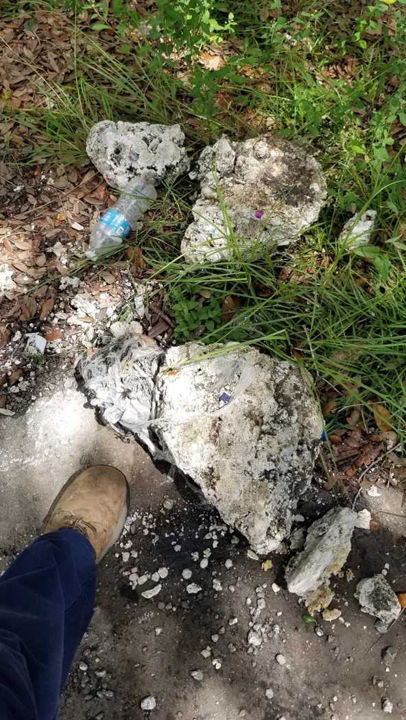 Large balls of grease in a city of Albany stormwater drain line led to a 30,000-gallon spill in 2019. 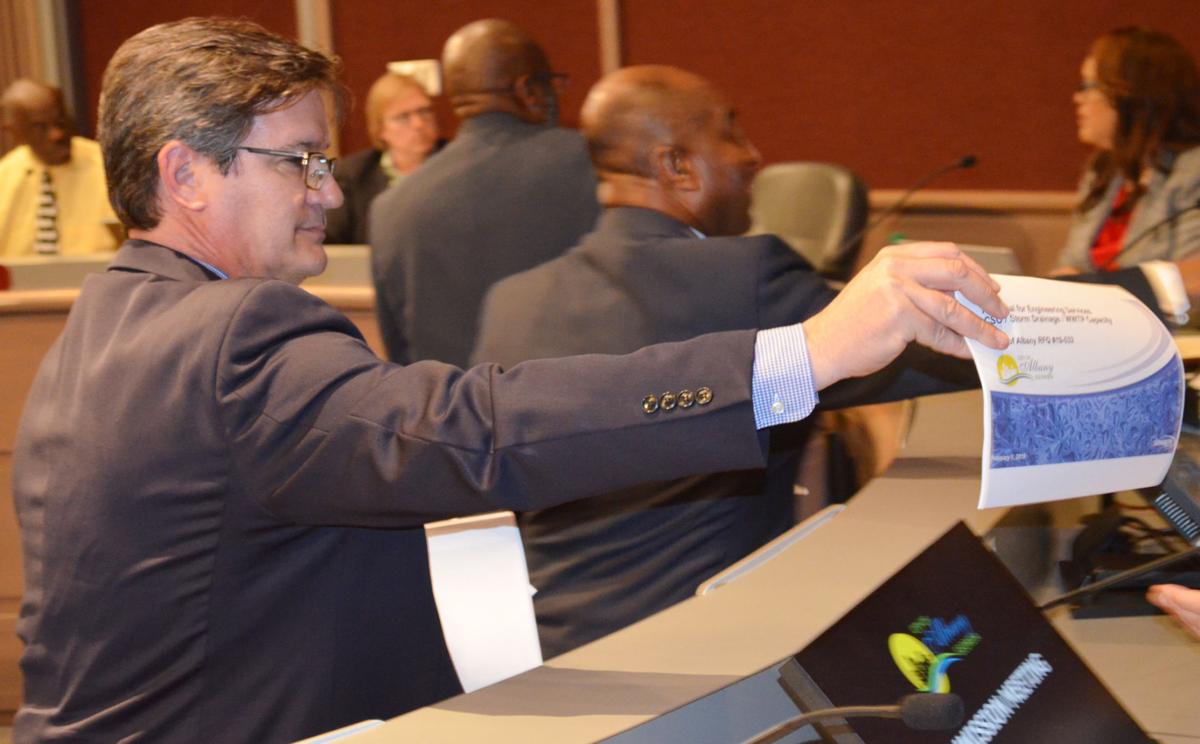 Jeffrey Duplantis, a senior project manager for Constantine Engineering, hands out copies of his company’s sewer analysis proposal at a 2019 Albany City Commission meeting. The engineering group was hired to complete an audit of the city's aging sewer system, which they finished and presented to the commission last week. 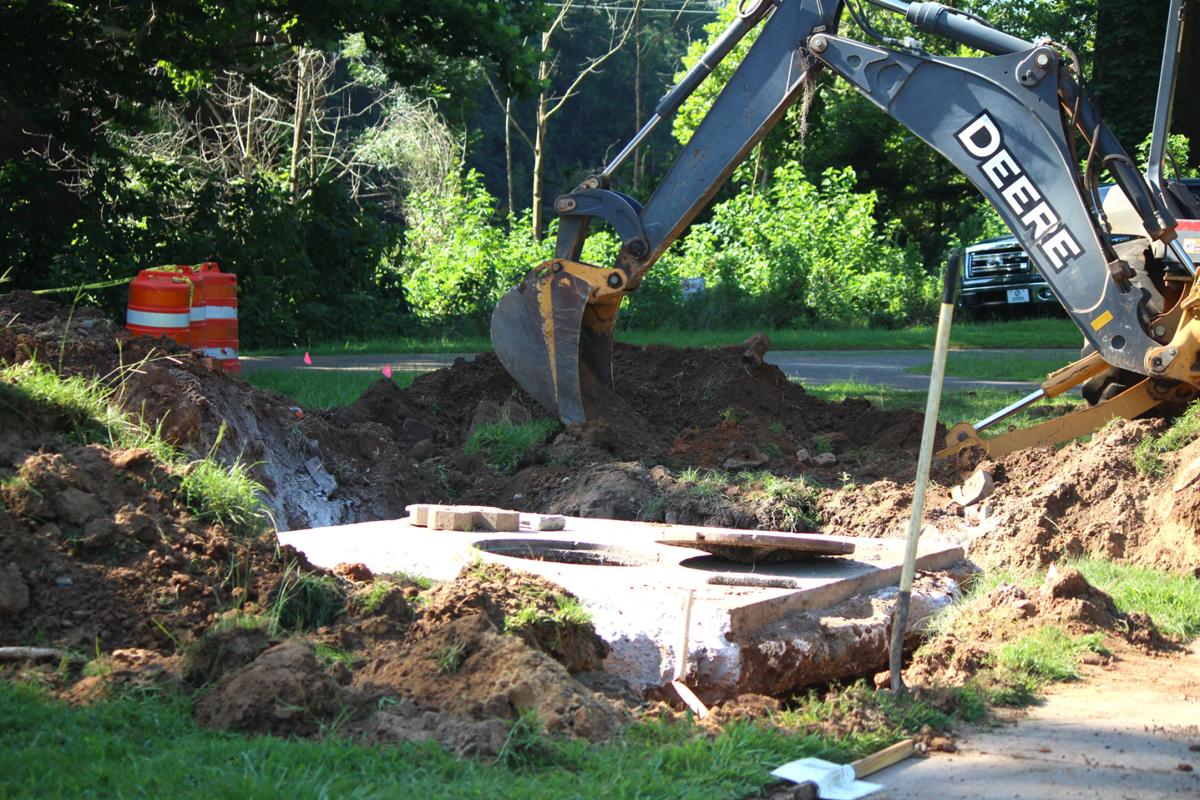 The city of Albany has reported spills of raw sewage into the Flint River totaling hundreds of thousands of gallons in recent years. 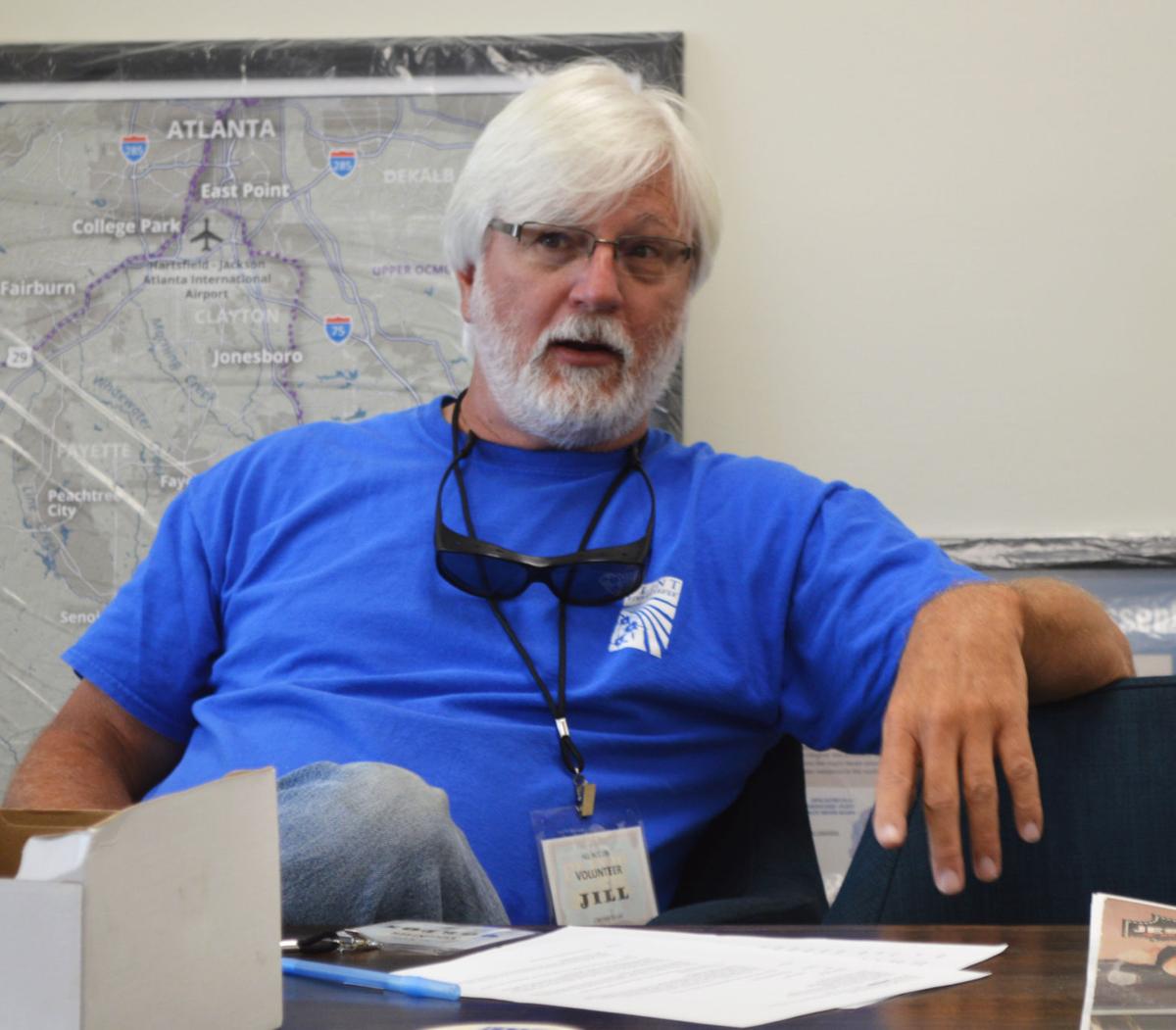 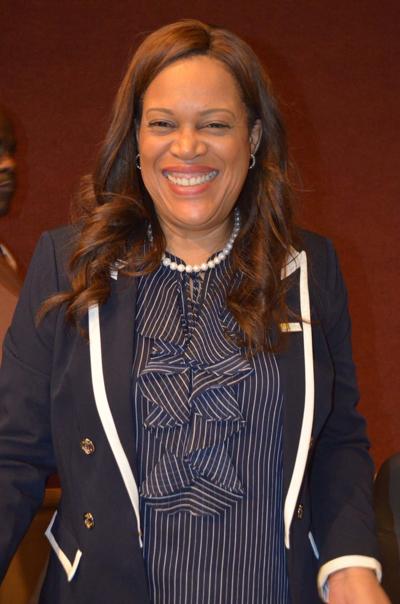 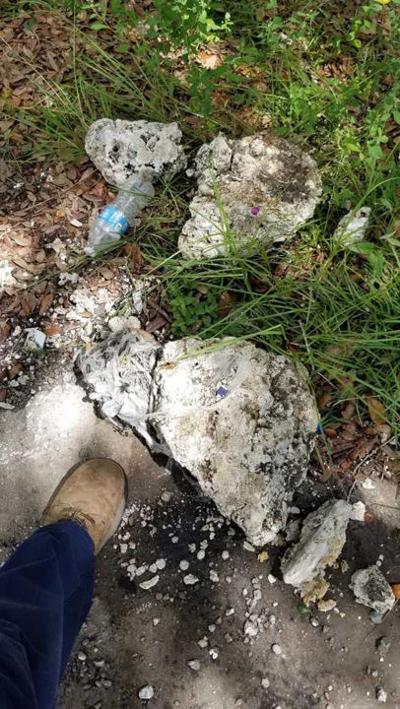 Large balls of grease in a city of Albany stormwater drain line led to a 30,000-gallon spill in 2019.

Jeffrey Duplantis, a senior project manager for Constantine Engineering, hands out copies of his company’s sewer analysis proposal at a 2019 Albany City Commission meeting. The engineering group was hired to complete an audit of the city's aging sewer system, which they finished and presented to the commission last week.

The city of Albany has reported spills of raw sewage into the Flint River totaling hundreds of thousands of gallons in recent years.

EDITOR’S NOTE: First in a series of articles looking into the city of Albany’s sewer system issues and how it plans to address them.

ALBANY — The sheer magnitude of the number is almost incomprehensible ... $234 million.

And while some in the community have already expressed outrage that city leaders would allow such a number to even be uttered aloud — as if these officials were responsible for an antiquated sewer system that has long outlived its purpose while that purpose has done nothing but expand — the truth is that past officials allowed this problem to reach critical mass by simply ignoring it over the advice of officials who warned that a day was coming that the sewer system would become a massive burden.

That day has arrived.

Constantine Engineering, hired by the city of Albany to do an analysis of the city’s sewer system that had, in the last few years, leaked millions of gallons of raw sewage into the Flint River, released the findings of that audit to city commissioners last week. Their finding: $234 million worth of upgrades are needed.

“No one wants to hear that there is a $230 million problem with our infrastructure, but that problem didn’t just happen,” Albany City Manager Sharon Subadan said. “It’s been building over years and decades as the sewer system in the city has aged. Because action wasn’t taken in the past, we’ve reached this point.

“But we knew this could not be put off any longer. That’s why this and the previous city commission have worked to come up with a comprehensive solution. It is no longer good enough to keep putting Band-Aids on the problem.”

Constantine was brought in to do a comprehensive audit of the city’s sewer system after several high-profile leaks at lift stations in the city’s downtown district pumped hundreds of thousands of gallons of raw sewage into the Flint. After the application of a few of those Band-Aids that Subadan mentioned, a more permanent solution was sought.

The Flint Riverkeeper organization, whose offices are in downtown Albany, collected samples of river water for testing and became closely involved in efforts to make lasting improvements in a system that, in places, is more than 100 years old. Much as the Chattahoochee Riverkeeper environmental group had done in Atlanta in the 1990s (after officials in that city at the time said they’d just keep paying fines rather than take on the cost of a sewer system overhaul), the Flint group waved the threat of a lawsuit in front of city officials who edged toward denial as they pondered a potentially budget-busting overhaul.

But Flint Riverkeeper Executive Director Gordon Rogers said the organization wanted to work as an ally with the city rather than toss around threats.

“Albany now has 40% separation and has been granted a number (eight) of CSO permits that allow for the continued blending of waste and storm water until complete separation is achieved. But those orders were never intended to be permanent.”

When the sewage leaks became almost weekly news items over a period of several months, city officials tasked Subadan and her top lieutenants with coming up with a workable long-term solution. The audit by Constantine was the first step.

Now, though, with that $234 million price tag on display, the question becomes how to develop a plan that will meet the needed requirements without allowing other costly services to go lacking.

“It’s like that old saying of eating an elephant one bite at a time,” Subandan said. “I think the commission has made this a priority, and there is a growing call to start working on a plan that will allow us to start taking some of those bites. Obviously, how we pay for this massive project is the primary question, but one of the first things we must do is prioritize as we look at things like funding through our budget and our tax revenues.”

Ward IV City Commissioner Chad Warbington said the city has an opportunity to make a dent in the overall project with seven or eight “low-hanging-fruit” projects that have already been engineered and are projected to be financed with money in the city’s next (Fiscal Year 2021) budget.

“This problem is with us because the sewer system has always been kind of out of sight, out of mind,” Warbington, who has an engineering background, said. “That makes it easy to forget. But we’ve reached a point where we can’t forget it. I think there is unanimous support on the commission to tackle this challenge. We have to treat it as a priority and stay focused on it. Something may come along that distracts us temporarily — something that grabs our immediate attention — but we have to be disciplined and stay the course.

“We have eight CSOs — eight plans that permit the dumping of wastewater into our river. I think our first priority should be to see how quickly we can cut that from eight to six, and then from six to four. It might not seem like a lot, but when you start cutting 25% of the waste, and then 50%, now you’re making a difference.”

Warbington said his understanding is that the seven or eight sewer-related projects already budgeted for consideration are “shovel-ready projects” that could be started almost immediately.

“We’re talking about projects that, together, might add up to around $3 million-$4 million,” he said. “While that might not seem like much with a number like $234 million hanging over our head, it’s the kind of thing we have to do. We have to take a 10- to 20-year approach on getting this done.”

Rogers said he and the Riverkeeper organization have been impressed with the city’s response to the sewer emergency.

“Dealing with a sewer system is not sexy,” he said, “but it’s a hellish problem when the system goes bad. From the beginning, the city has done three things that have impressed us:

♦ “ From staff to elected officials, they’ve embraced the problem and my hats are off to the former mayor (Dorothy Hubbard) and the new mayor (Bo Dorough) for embracing the importance of this issue;

♦ “The city commissioned the study that Constantine did, which will be a great tool for them as they move forward;

♦ “And when the report was presented, you didn’t see a deer-in-headlights look from anyone on the commission; there was no sticker shock apparent, even with two new commissioners and a new mayor.”

Rogers said he’s been so impressed by the city’s action and reaction to the audit that legal action is not very likely.

“All indications we’ve gotten from the city is that there’ll be no turning back,” he said. “I was part of a conference call with city officials shortly after the Constantine report was released, and a couple of lawyers (who represent the environmental group) were also on the call. Afterward, one of them said, ‘I don’t think you’re going to need me.’

“I commend the Albany Commission and Mrs. Subadan. I don’t think when she took the job that she understood how big a problem she had inherited. But she has not shirked the task, and God bless her — and the two mayors — for being courageous enough to embrace this issue. It might have been (former University of Georgia defensive coordinator) Irk Russell who coined the phrase, but (former UGA head coach) Mark Richt used to say it all the time: ‘Finish the drill.’ The time has come to finish this drill.”

None of which takes a dollar off that $234 million price tag. But Subadan said she’s working with a board that has shown every evidence that it wants to meet this problem head-on and get it done.

“Yes, that’s a huge number,” the city manager said. “But I believe this commission — and the one before it that worked on this process — understood that it wasn’t going to get any smaller. And what I see (in the wake of the report) is a group determined to take this on. I think we’re in a good position with our fund balance to face the future, and I think you’ll see us moving forward with a first step soon.

HIV medications for children can be bitter to swallow. A strawberry-flavored drug might help

Why vaccinate our most frail? Odd vote out shows the dilemma

HIV medications for children can be bitter to swallow. A strawberry-flavored drug might help