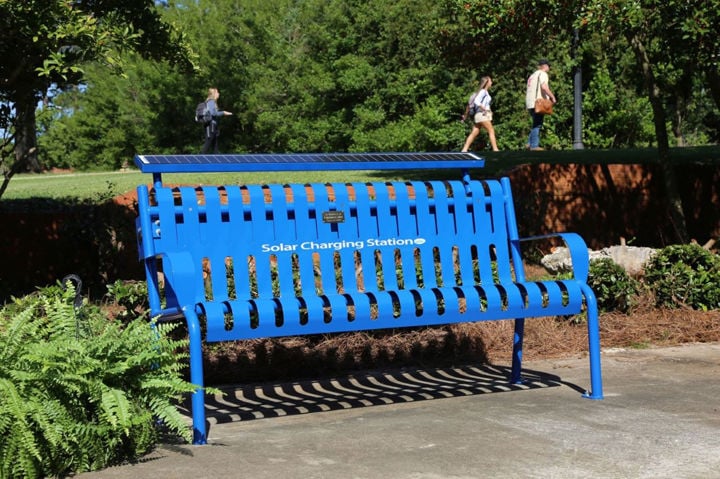 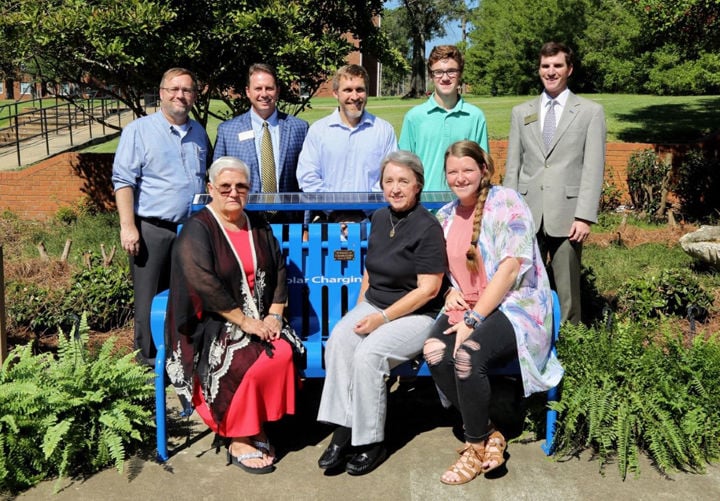 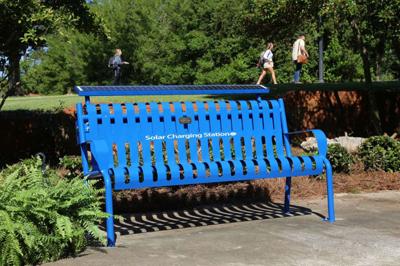 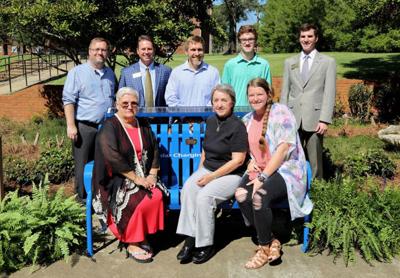 AMERICUS — In memory of her late husband, Linda Grimsley (’68, ’83) of Sylvester recently gifted a solar bench to Georgia Southwestern State University, the place she credits with bringing the two together.

A dedication ceremony of the bench honoring Alan Grimsley (’68), who passed away earlier this year, was held last week with family and GSW faculty, staff and students in attendance. The bench, which is powered by the sun and doubles as a charging station for electronic devices, was placed outside of the James Earl Carter Library. Grimsley said she first met her husband in the old library, so it was only fitting the bench be placed outside the new one.

One of their sons, Alan, spoke at the ceremony.

“Americus and Georgia Southwestern are something I’ve heard about since I was a little kid, and it’s a really special place to our family,” Alan Grimsley said. “I think daddy would be really proud of this since it is practical – it’s not just a bench but it does something else. He was a big multitasker.”

Grimsley continued by joking that maybe one day, a couple of people will be sitting at the bench, one will be charging and the other will need to borrow their charging cable.

“Fifty-something years from now, there may be another bench on the other side,” he said.

“This is a remarkable gift to the campus, Weaver said. “Every day as our students sit here to rest and also to charge up, we will remember Dr. Grimsley and the impact he made on people’s lives as a long-time Georgia educator. We are so pleased the university made such an impact on your life that you wanted to give back.”

Alan Grimsley, a GSW alumnus and graduate of the first baccalaureate class, was “recruited” to attend Georgia Southwestern back in 1964 by then-GSW President William King, who was on staff at Alan Grimsley’s high school in Fitzgerald. After earning numerous teaching degrees and his doctorate, Grimsley occasionally returned to his alma mater at GSW to teach courses as needed.

Before his passing in February 2019, he was a full-time faculty member at Albany State University.

(Library) The Grimsleys first met in the old library so the bench was placed outside the James Earl Carter Library.

Have suitcase, will travel! Americans take to the skies in almost pre-pandemic numbers as Covid-19 restrictions ease

POLL: June is National Iced Tea Month. What is your favorite way to consume this refreshing beverage?

Cockatoo And Baby Boy Do Everything Together | The Dodo Soulmates