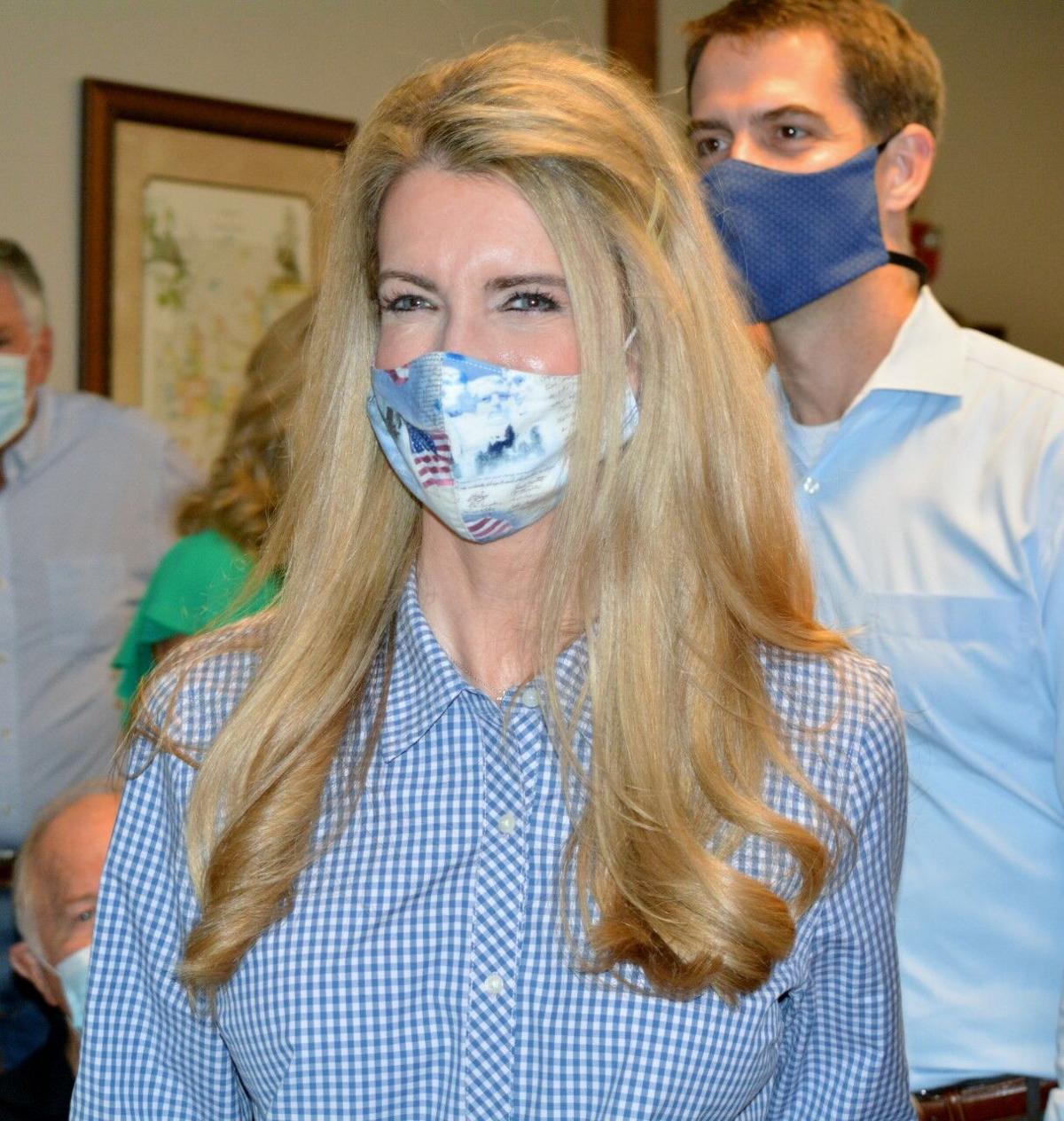 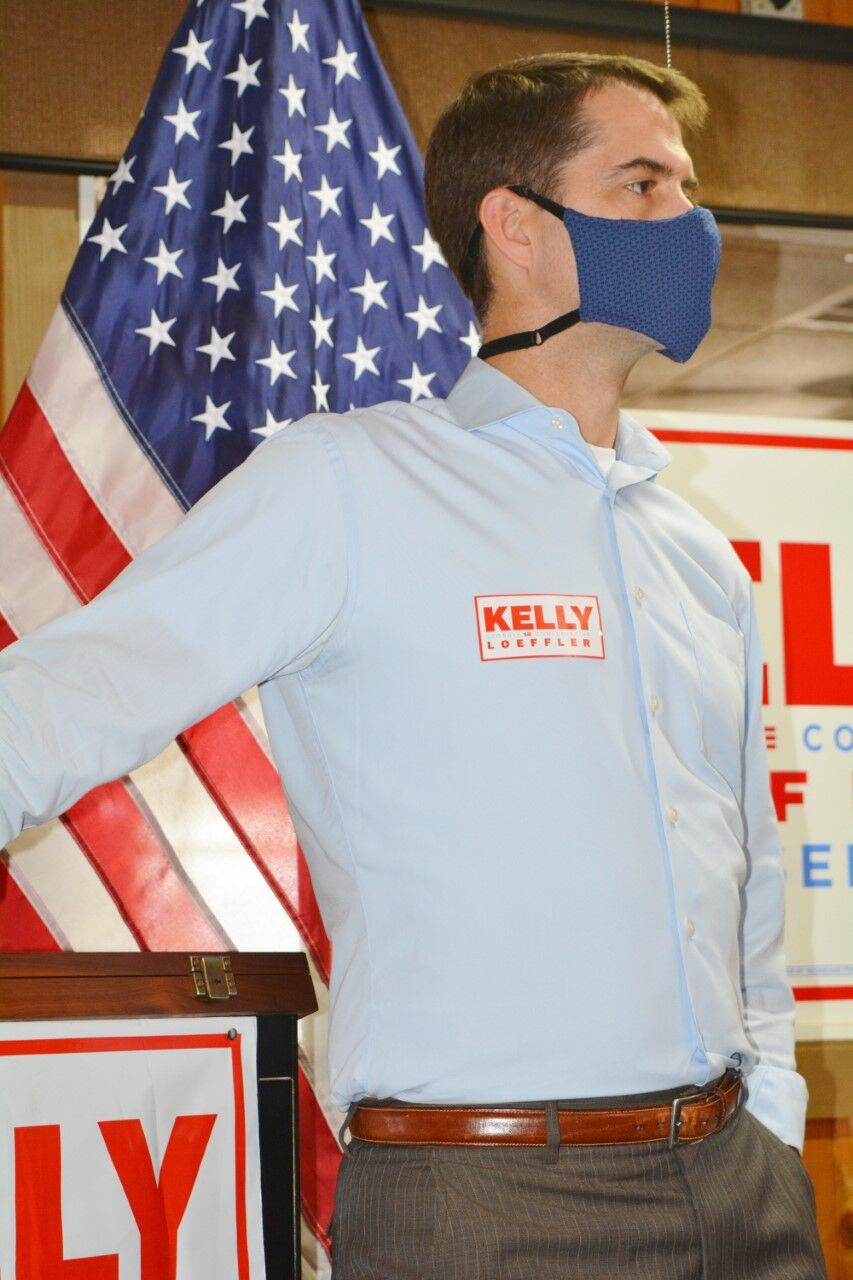 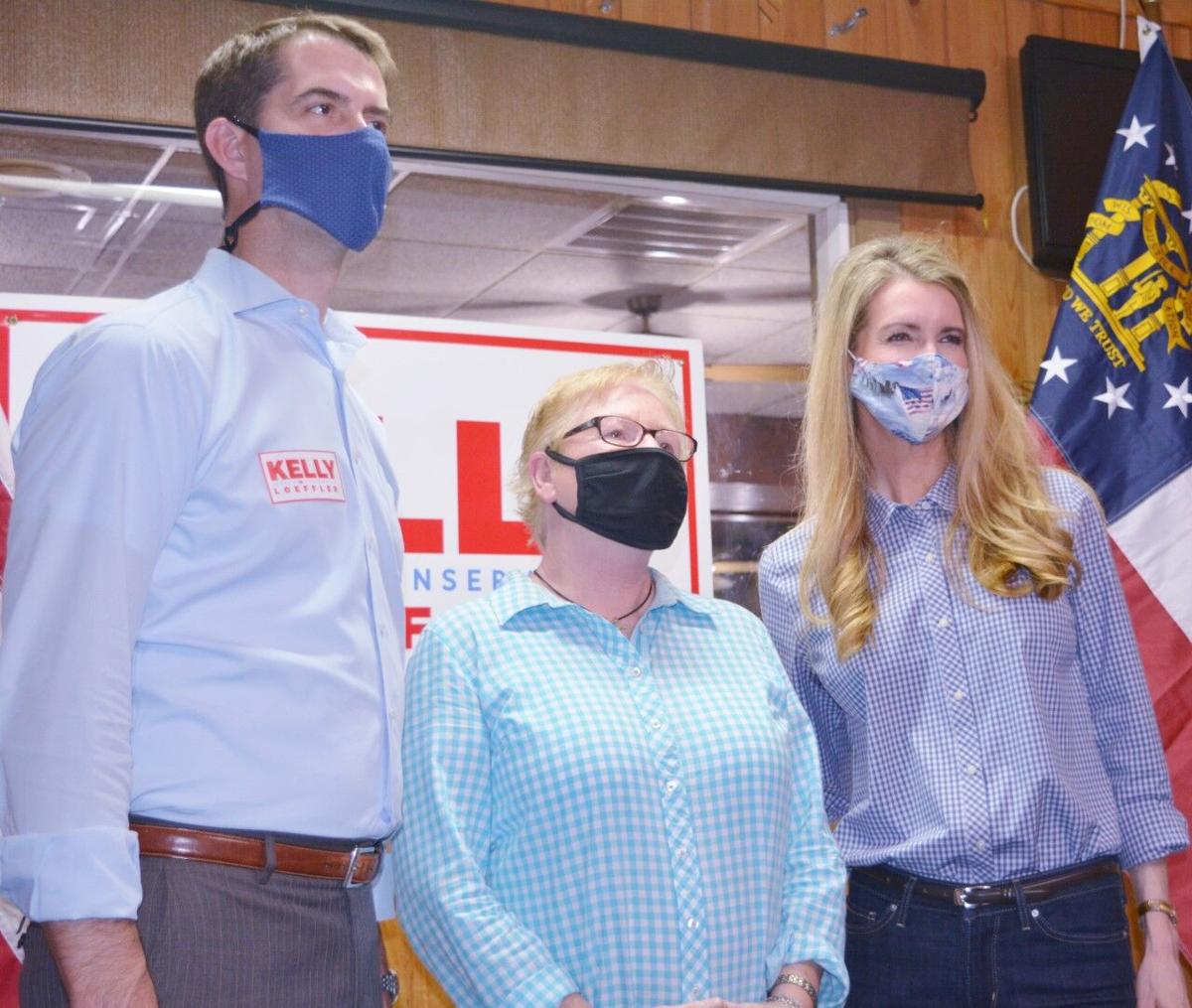 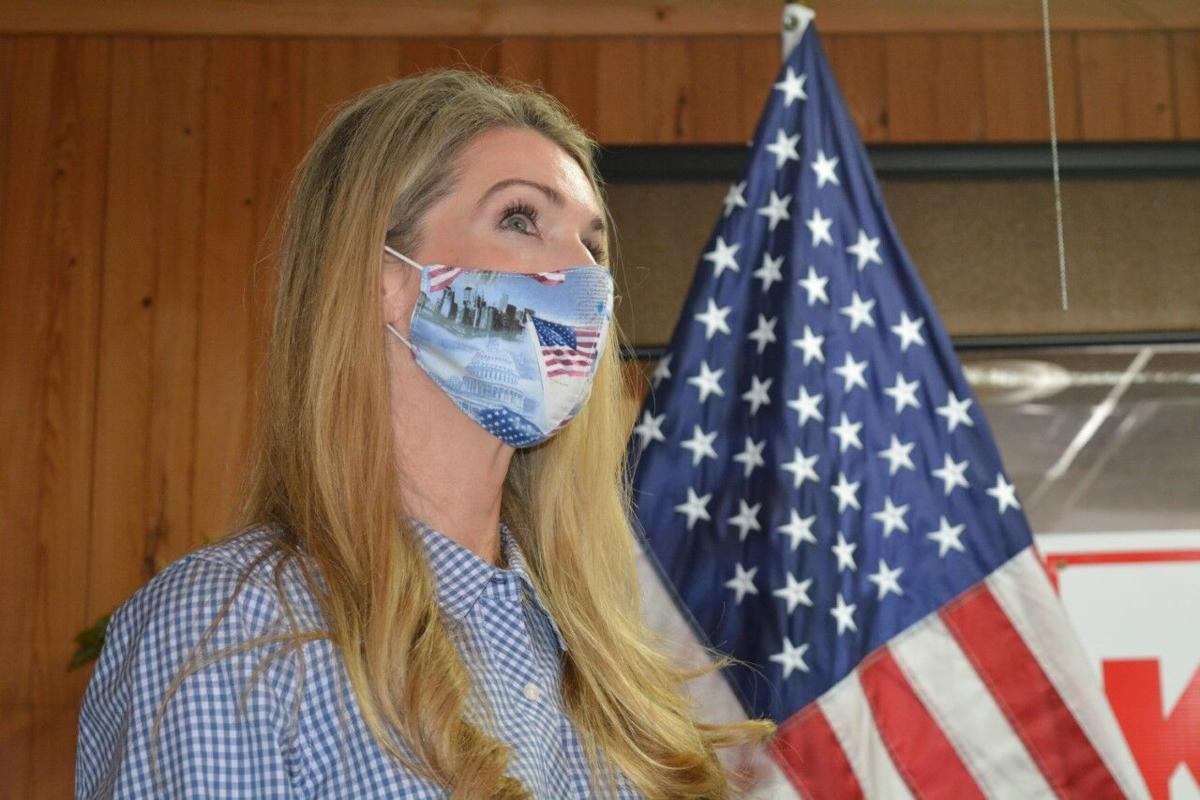 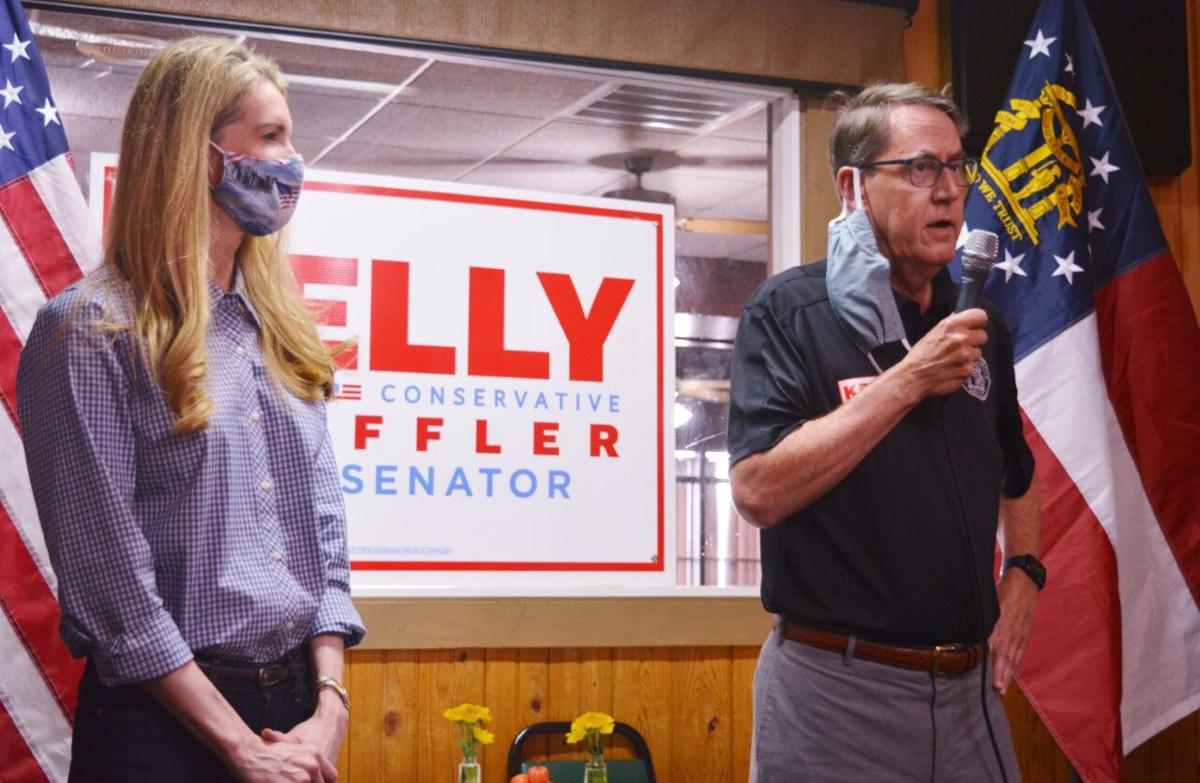 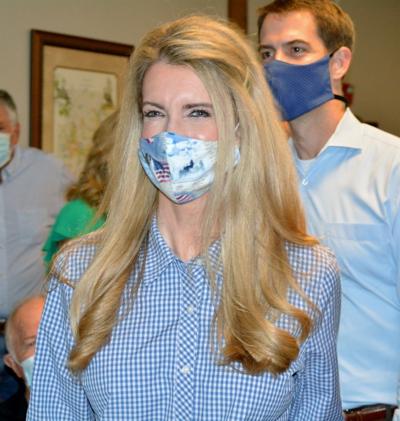 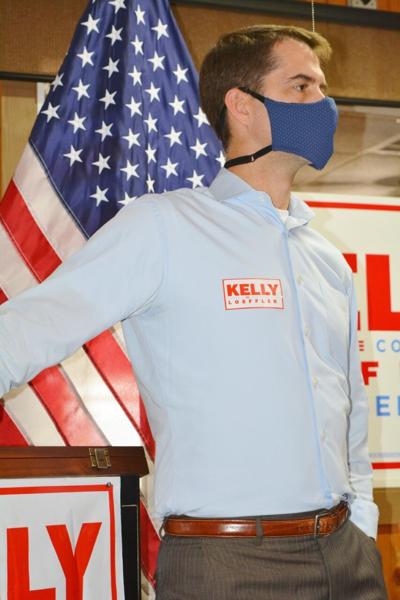 ALBANY — Confirming her bona fides as the “most conservative legislator in the U.S. Senate,” Georgia Sen. Kelly Loeffler told an enthusiastic crowd of supporters in Albany Monday that their votes to keep the Senate in Republican hands is the “firewall” to preserve the nation’s conservative values.

Speaking to a crowd of around 80 at BJ’s Country Buffet restaurant, and joined for the visit by Arkansas Sen. Tom Cotton, Loeffler stuck mainly with the themes that have been the heart and soul of her campaign to maintain the seat to which she was appointed by Gov. Brian Kemp when former Republican Sen. Johnny Isakson stepped down for health reasons.

Loeffler is one of 21 candidates in the special called “free for all” election that will select a senator to serve the final two years remaining on Isakson’s term. Latest polls show she is running second in the race behind Democrat the Rev. Raphael Warnock, who campaigned in Albany Saturday. The latest polls show Warnock receiving 36% of the vote, Loeffler 25% and Republican U.S. Rep. Doug Collins 23%. If none of the candidates receives more than 50% of the vote, the top two vote-getters will square off in a runoff in January.

“Albany, you folks, have been in my heart from Day 1 of this pandemic,” Loeffler, who donated $1 million to Phoebe Putney Memorial Hospital early in the pandemic, said. “And I want to go off script here for a minute and say the best part about this job is working for you, not Washington. I don’t owe Washington anything.

“My resume, I think, speaks for itself. I have been named the most conservative member of the U.S. Senate. I promise you that I will stand up for the unborn, and I will stand up to the cancel culture. I’ve been attacked for my success, just like President Trump, but I ignore that. We just keep doing our job, upholding the American values that made our country great.”

While declaring “there’s no place for racism in this country,” Loeffler said she’s stood strong against the politics of groups like Black Lives Matter.

“Michelle Obama and Stacey Abrams had players in the WNBA (an organization for which Loeffler is part owner of the Atlanta Dream) wear shirts supporting my opponent (Warnock), and I was criticized for suggesting that we put an American flag on our players’ jerseys to show that we’re all on the same team,” she said. “We have to root out the kind of mindset that calls for defunding the police — who are heroes in this country and know that I’ll always have their backs. Black Lives Matter has a five-year plan to abolish police in our country. What they’re seeking is chaos.”

Loeffler also vowed to make sure Amy Coney Barrett would be confirmed as a Supreme Court justice before the Nov. 3 election, and she declared the “left’s abortion on demand agenda is disgusting.” She also said she’s won the approval of the NRA as a strong advocate for “your Second Amendment rights,” declaring, “the left wants to take your guns away, but we won’t let them.”

State Rep. Dean Burke of Bainbridge led the gathering in a prayer and the Pledge of Allegiance before restaurant owner and Albany City Commissioner B.J. Fletcher introduced Cotton and Loeffler.

Fletcher called that chore “one of my greatest honors.”

Cotton told the crowd he was working with Loeffler — and others in the Senate — “to hold China accountable for what they did to this country,” a reference to the coronavirus pandemic that crippled the American economy and has killed more than 200,000 Americans.

“We can trace that harm back to the Chinese Communist party,” Cotton said. “So we’re working to make sure our military is so strong, China will be afraid to take a shot at an American citizen.”

Loeffler told the crowd to “get in touch with 500 of your closest friends and make sure they vote early.”

Early voting started Monday and will continue weekdays — and on a Saturday, Oct. 24 — through Oct. 30.

People who place their 'I Voted' stickers on Susan B. Anthony's headstone will notice something different there this year

Orlando City aims to get back on track vs. Atlanta United