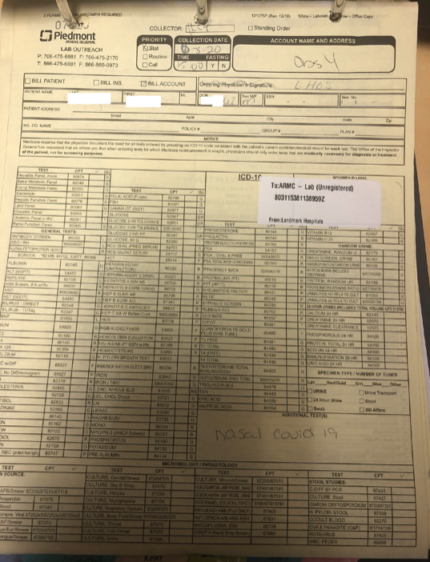 A lab requisition order is used in a lawsuit filed by nurses at an Athens hospital who said the hospital’s administration is releasing false coronavirus information. 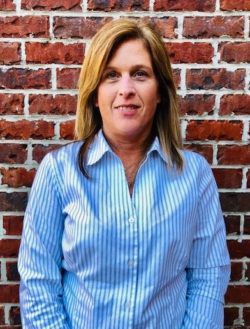 Marie Saylor is CEO of Landmark Hospital of Athens, which is being accused of falsifying COVID-19 test results. 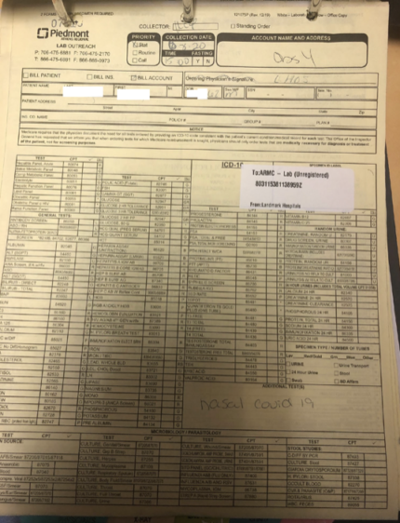 A lab requisition order is used in a lawsuit filed by nurses at an Athens hospital who said the hospital’s administration is releasing false coronavirus information.

Marie Saylor is CEO of Landmark Hospital of Athens, which is being accused of falsifying COVID-19 test results.

ATHENS — A group of nurses at a Georgia hospital have filed a lawsuit accusing their CEO of what they call a “COVID-19 coverup” involving the improper collection of test samples to reduce positive test results for the virus and downplay its spread.

Nurses employed or formerly employed at Landmark Hospital of Athens, a 42-bed long-term care hospital in northeast Georgia, told Georgia Health News that five of their patients tested positive for COVID-19 after showing symptoms. The hospital administrator then ordered retesting of those patients, intentionally collecting samples outside the proper protocols to increase the likelihood of a negative result, the nurses allege in the lawsuit.

The Landmark nurses have filed the suit anonymously as Jane and John Does, calling for a judge to order the hospital’s administrator to stop “continuing to fabricate inaccurate COVID-19 tests results, transferring and discharging patients to outside facilities and admitting patients to Landmark.” The nurses are also seeking damages for being unnecessarily exposed to COVID-19 due to the lack of precautions taken.

“Landmark fabricated negative results so as to continue to be able to discharge patients to make space for new admissions and avoid the negative publicity and oversight that would result if the positive COVID-19 results were disclosed,’’ the lawsuit, filed Wednesday, alleges.

Marie Saylor, CEO for Landmark Hospital of Athens, declined to answer GHN’s questions about the allegations by the nurses. In a statement, Saylor pledged to “vigorously investigate allegations and defend our hospital and its staff against misleading and false claims.”

“We have always made the safety and well-being of our patients and staff our top priority, and continue to do so as we manage the local impact of the COVID-19 pandemic,” Saylor said in a statement.

As COVID-19 has swept the nation, testing the limits of America’s health care systems, some hospitals have failed to disclose the full extent to which the infectious disease has affected their patients. Hospital administrators from Ohio to Oregon have been reluctant to publicly release COVID-19 infection data, in part due to concerns over how it may impact those facilities’ reputations and bottom lines.

The lawsuit said patients who tested positive were not isolated from others, and that staff was not given personal protective equipment or the resources to give safe treatment for these patients.

“Even if these patients could have been properly isolated, Landmark’s central air conditioning has not worked for any of the relevant time period,’’ the suit added.

The plaintiffs have contacted the Occupational Safety and Health Administration, the Georgia Department of Public Health, and the U.S. Department of Health and Human Services, but to date, no government agency has intervened in the situation, the lawsuit said.

The nurses say they worry that Landmark Hospital will soon discharge patients to nursing facilities without acknowledging to the facilities that the patients had tested positive for COVID-19.

“This is based on greed,” said one of the nurses, all of whom spoke with GHN on condition of anonymity, claiming fear of retribution. “It’s not about the patients. It’s not about the staff — we’re not afraid of COVID-19, but we don’t want to spread it to other patients. We want to isolate and treat it appropriately.”

At the center of the nurses’ allegations are five patients who tested positive for COVID-19 at Landmark Hospital between June 4 and June 8. Most of Landmark’s patients are on ventilators and are receiving care after a hospital stay but before being discharged to a nursing facility or a family member’s home.

For each of the first four patients, nurses told GHN, a swab was inserted into their deep nasal cavities to collect specimens — a protocol considered by many medical experts to be the most accurate source of a COVID-19 test.

After a lab at Piedmont Athens Regional processed the samples, and returned positive results for the virus, the hospital administrator rebuked the nurses, the nurses told GHN.

The nurses allege in the suit that Landmark Hospital had “previously attempted to submit tracheal swabs to the lab at Piedmont Athens Regional, and these samples had been rejected as the lab was not able to perform tests on these types of specimens.”

The second round of tests came back negative.

At that point, the nurses told GHN, they were ordered by the administration to stop testing patients for COVID-19.

Despite Landmark’s orders, one nurse conducted a third test using a nasal swab procedure. The test came back positive. Soon after, a staff respiratory therapist collected a stoma sample from the same patient, which came back negative, the nurses said.

With another patient, Saylor allegedly ordered a nurse practitioner to remove a test order from the hospital’s internal system, according to the lawsuit.

One of the nurses, who defied Landmark’s orders, was fired for testing the patient, the lawsuit claims.

The nurses, after taking their concerns about the hospital to several government agencies, but having seen no immediate intervention, have asked a judge in Gwinnett County, where Landmark has its registered agent, to stop company administrators from improperly testing patients for COVID-19.

The nurses say they now hope that the judge will prevent Landmark from admitting or discharging any of the nearly three-dozen remaining patients until every one has been tested properly.

Following the nurses’ lawsuit, Saylor released a second statement announcing that three employees were suspended with pay pending the results of an investigation into whether medical records and company property were stolen from the hospital. Saylor also said the investigation would look into whether those employees violated patients’ confidentiality.

“The safety and privacy rights of our patients is our top priority,” said Saylor.